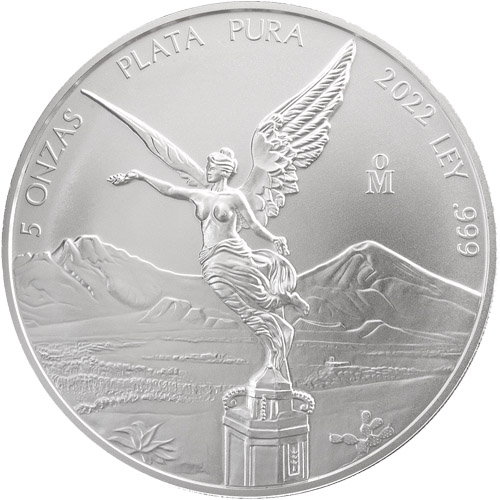 The first release of a Proof Mexican Silver Libertad Coin came in 1983 when a limited number of 1 oz silver coins were produced. It wasn’t until 1986 that the coins were offered annually and the series, initially, remained limited to a 1 oz silver option. In 1992, 1996, and 2002, the Mexican Mint expanded the series further.

On the obverse of 2022 5 oz Proof Silver Libertad Coins, you will find the modern coat of arms of Mexico. Set at the center of the field, the Mexican golden eagle is on a prickly pear cactus with its talons and beak controlling a serpent. There is a wreath of oak and laurel below and the nation of issue above. The boundary of the coin’s design field comes with 10 historic versions of the coat of arms.

The reverse field of each 2022 Proof Mexican Silver Libertad Coin comes with the statue of Winged Victory. Her statue is set at the top of the Mexican Independence Column and celebrates the 100th anniversary of Mexican independence.