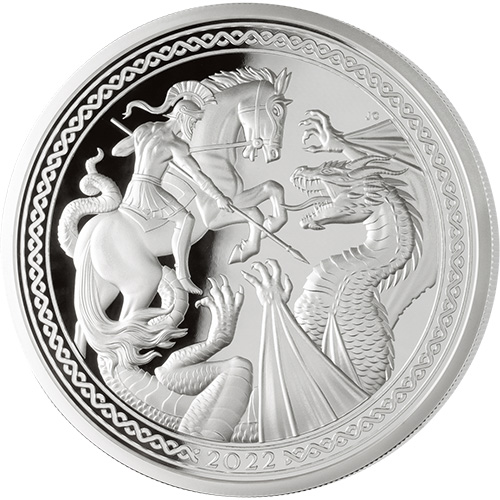 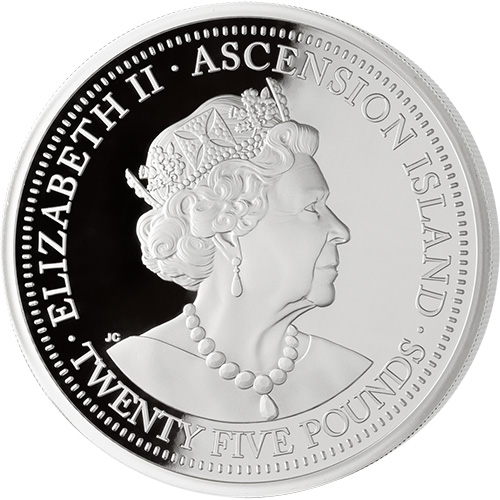 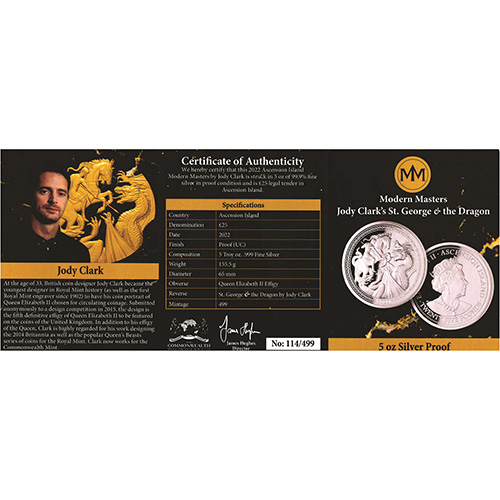 The new Modern Masters Series from The Commonwealth Mint promises to be a real treat for fans of coin history. The series gives three of today’s finest engravers the chance to recreate Benedetto Pistrucci’s iconic 1817 Gold Sovereign reverse design. For the first issue, a design by Great Britain’s Jody Clark is featured. Now, 2022 5 oz Proof Ascension Island Silver Modern Masters St. George & The Dragon Coins are available to you for purchase online from JM Bullion.

In 1817, The Royal Mint issued a brand-new Gold Sovereign that is now recognized as a masterpiece in the coin world. The iconic George and the Dragon reverse by Benedetto Pistrucci on that 1817 classic are now honored in this exciting new series from The Commonwealth Mint. Jody Clark, who famously designed the Fifth-Generation coin portrait of Queen Elizabeth II, was tasked with the first recreation. His will be followed by designs from South Africa’s Natanya Van Niekerk and John Mercanti of the United States.

All 2022 5 oz Ascension Island Silver Modern Masters St. George & The Dragon Coins will arrive in their original mint packaging. This consists of a display case, a pamphlet with details about designer Jody Clark, and a Certificate of Authenticity. These coins were struck at The Commonwealth Mint in partnership with Ascension Island, where they are considered legal tender.

The obverse of 2022 5 oz Proof Silver Modern Masters St. George & The Dragon Coins contains a portrait of Queen Elizabeth II. In this design from Jody Clark, we see the Queen in right-profile relief wearing her coronation crown, the George IV State Diadem. Across the edges, there are inscriptions reading Elizabeth II, Ascension Island, and Twenty Five Pounds.

On the reverse, we see Jody Clark’s rendition of St. George fighting the dragon. Clark rose to fame when, at 33, he became the youngest designer to have a portrait accepted for coinage by the Royal Mint. His initials are included in the upper corner of the design. We also find the year of release and a decorative pattern along the edge.

JM Bullion customer service is available to assist you at 800-276-6508 with any questions when buying silver. Our team is also available online through our live chat and email address features.