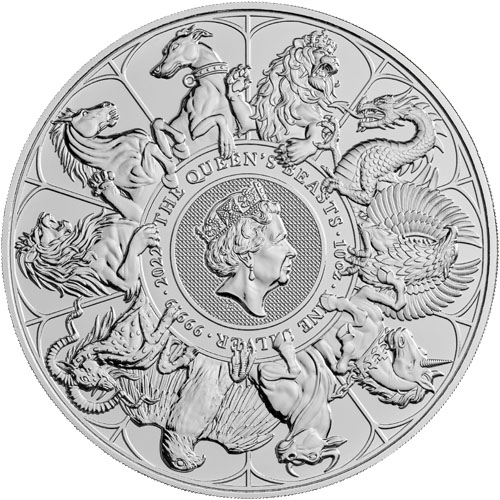 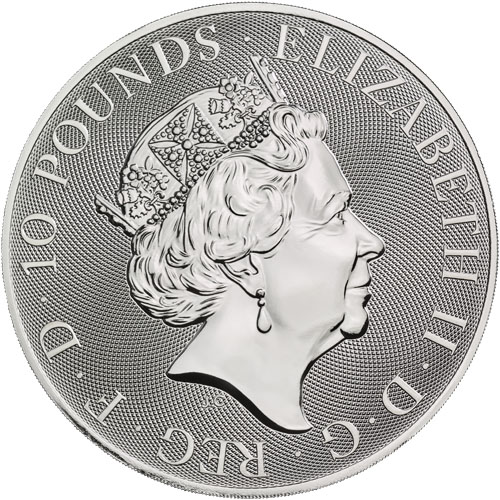 From 2016 to 2021, the Royal Mint of England celebrated the extensive history and legacy of the crown of England. The most high-profile heraldic beasts to feature in the Royal Arms and personal seals of monarchs over more than 800 years were featured throughout this collection. Now that the designs are complete, the mint offers a Queen’s Beast Collection Coin to investors and collectors as a final piece of the puzzle. Right now, 2022 10 oz British Silver Queen’s Beast Collection Coins are available to purchase online from JM Bullion.

Each of the 2022 10 oz British Silver Queen’s Beast Collection Coins listed here comes with a protective capsule. Individual coins arrive in these capsules, with multiples of 15 encapsulated coins offered in a box. All of the coins are in Brilliant Uncirculated condition.

The Queen’s Beast Series at the Royal Mint started in 2016 with the Lion of England, the oldest heraldic animal in the history of the monarchy. The release schedule offered a single design in 2016, followed by two annual designs in 2017, 2018, 2019, and 2020, and another single design issue in 2021 to complete the series. Following the final design’s release in 2021, the mint began to release these Queen’s Beast Collection coins in the same popular BU weights as the 10 previous designs.

Obverse designs on the 2022 British Silver Queen’s Beast Collection Coin include Jody Clark’s effigy of Queen Elizabeth II. This right-profile relief shows the Queen with the George IV State Diadem Crown. Designed in 2015, this portrait captures the Queen at the age of 89. It is set against a background field texture known as a guilloche. This texture has the appearance of braided rope.

Reverse visuals on 2022 10 oz Silver Queen’s Beast Collection Coins include both the Jody Clark portrait of Queen Elizabeth II, and all 10 heraldic beasts. The beast designs that featured independently on the reverse of the coins in the series were also designed by Clark. This Collection Coin shows all 10 beasts in order of appearance in the series, starting with the Lion of England at the top and going clockwise around the edge in terms of the order.

If you have any questions about these silver bullion coins, please feel free to ask. JM Bullion customer service is available at 800-276-6508, online using our live chat, and via our email address.