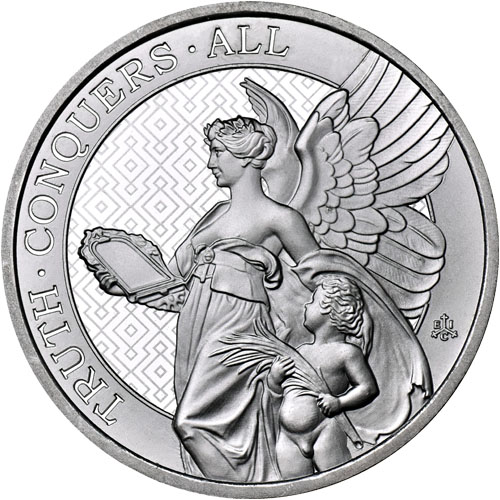 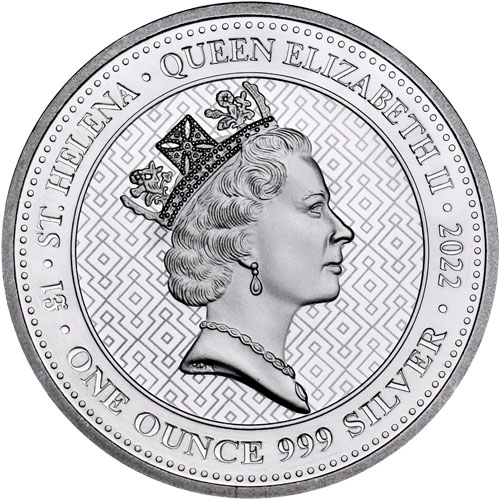 As low as $4.89 per coin over spot!
Add to WishlistLog In to add this product to your Wishlist
Free Shipping on $199+ Orders

The second release of the Queen’s Virtues Series from the East India Company and Issuing Authority of St. Helena has arrived. Following the debut of the series with the allegorical figure of Victory, the collection now moves on to focus on Truth in the second issue of the six-coin series. Now, 2022 1 oz St. Helena Silver Queen’s Virtues Truth Coins are available to you for purchase online from JM Bullion.

The six designs set to feature in the Queen’s Virtues Series of silver coins for sale are based on allegorical figures depicted in the Victoria Memorial outside of Buckingham Palace. The memorial was erected in the years after the death of Queen Victoria in 1901 and it contains several allegorical statues within the design of the monument.

Each one of these statues offered a female allegorical figure reflective of the virtues that were ascribed to Queen Victoria during her glorious reign as Queen of England. The statue at the very top of the monument is Victory, the first figure featured in this series. Now, another of those figures features in the series as Truth is issued second.

Queen Elizabeth II is depicted on the obverse side of the 2022 St. Helena Silver Queen’s Virtues Truth Coin. This effigy of the Queen is the third-generation design from the Royal Mint that was used from 1985 to 1997. Designed by Raphael Maklouf, it offers a timeless vision of Queen Elizabeth II with the George IV State Diadem on her head.

Truth features in the reverse design of 2022 1 oz Silver Queen’s Virtues Truth Coins. This image depicts the figure of Truth in left-profile relief as she holds a mirror in her right hand while reaching back to comfort a small child with her left hand. That small child holds a palm branch in its hands.

These 2022 1 oz St. Helena Silver Queen’s Virtues Truth Coins are available in Brilliant Uncirculated condition. The coins are packaged individually in plastic flips. Multiples arrive in either tubes of 20 coins or Master Boxes of 500 coins.

Daniel from VA - April 12, 2022
"What a beautiful round and I bought it 2 weeks ago on sale. Nice to see that it was a great investment based on todays price. JM Bullion has been my main source for quality, service, price and value for about 6 years now. No other supplier comes close."

Raymond from NY - April 02, 2022
"Purchased this coin because it was on sale. Lowest premium available against spot price. What a beautiful coin, again these are better looking in person. Thanks JM."