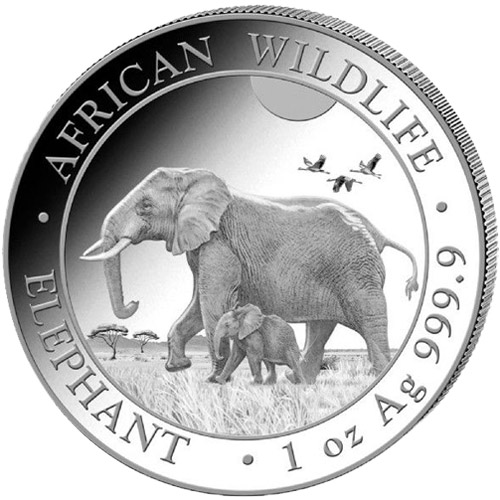 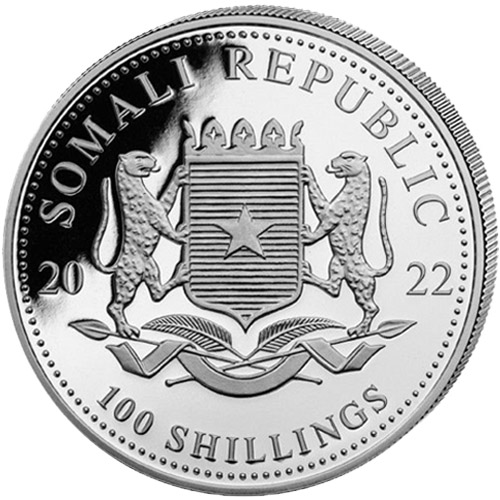 As low as $7.89 per coin over spot!
Add to WishlistLog In to add this product to your Wishlist
Free Shipping on $199+ Orders

The Bavarian State Mint introduced the African Wildlife Series Elephant Coins in 1999. From 1999 to 2003, the 1 oz silver coins were known as the Zambia Silver Elephant Series. While the nation of issue in this series has changed, the focus of the designs has not changed. The African bush elephant was then, and remains to this day, the focus of the series.

Each year, the Zambia Silver Elephant Coins had a new design on the reverse field featuring the African bush elephant in the wild. When the series changed to the Somalia Silver Elephant in 2004, this tradition continued. In the years since, the Bavarian State Mint has continued to expand this series to reach as large an audience as possible.

Obverse visuals on 2022 1 oz Silver Elephant Coins include the Somalia national seal. The nations coat of arms comes with a depiction of a crowned shield that has a single star at the center set against a background of horizontal lines. The shield is flanked on either side by leopards, with crossed spears and fern leaves below.

Reverse designs on the new 2022 1 oz Somalia Silver Elephant Coins feature a mother bush elephant with its young calf. The two are shown walking along the savanna with a small flock of birds overhead and a handful of trees on the horizon in the distance.

These 2022 1 oz Somalia Silver Elephant Coins are available to purchase in Brilliant Uncirculated condition. Individual coins arrive in a plastic flip. Multiples of the coins are offered in plastic tubes of 20 coins or Monster Boxes of 500 coins, with the box holding a total of 25 tubes.

Jennifer from - February 18, 2022
"As someone who has spent time with wild elephants in South Africa, this is one of my favorite series. This design in particular is one of the most striking, and charming, of those created by the Somalia mint. I purchased a number for myself, and a few to give as gifts as well!"