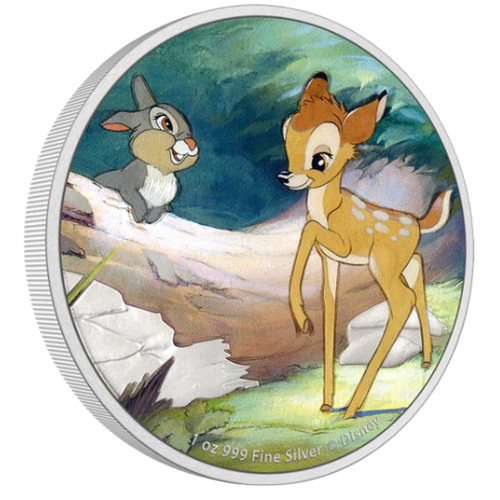 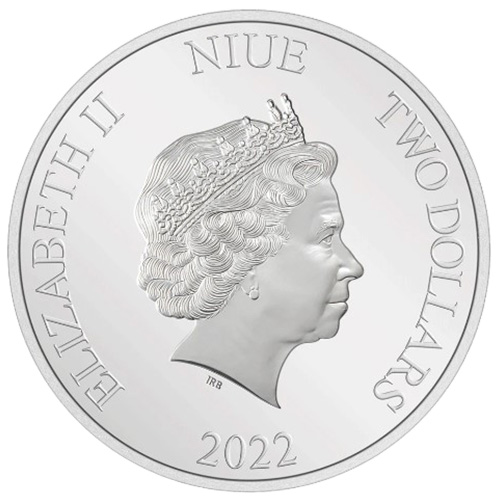 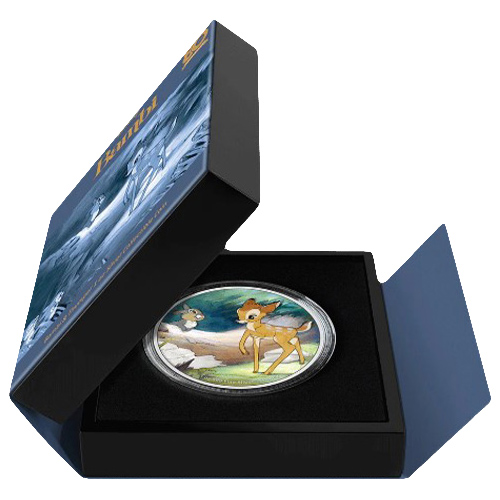 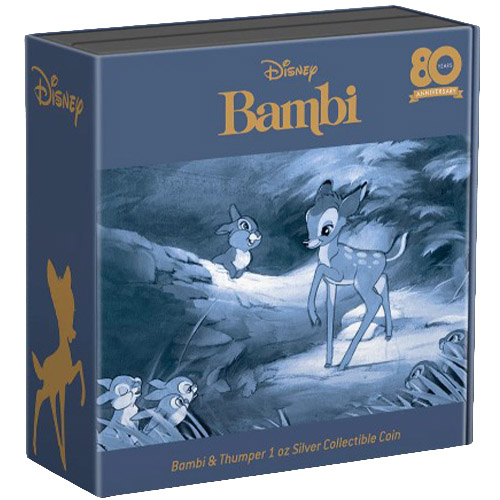 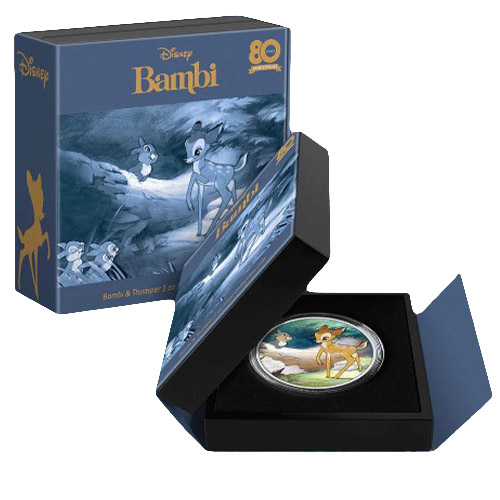 First released in 1942, Bambi is one of the great animated classics that built Walt Disney’s reputation as a producer. Based on the 1923 book Bambi, A Life in the Woods and directed by David Hand, it featured the adventures of a young white-tailed deer and his rabbit friend, Thumper, and won three Academy Awards. Although controversial with critics of the day because it depicted animals trying to escape the threat of humans, and because the story was darker than Disney’s previous fantasy offerings, it nevertheless went on to cement a legacy as an elegant and deeply touching creation. It’s commemorated by the New Zealand Mint with the 2022 1 oz Proof Niue Colorized Silver Disney Bambi and Thumper Coin.

Eighty years after its first release, Bambi is regarded as one of the very best animated films ever made, perhaps even as the crowning achievement of Walt Disney’s animation studio. It was selected for preservation in the Library of Congress’ National Film Registry in 2011, and has been an inspiration to many viewers’ interest in animal rights over the years due to the way the off-screen menace of “Man” conveyed a vivid sense of the struggle of wildlife to escape the threat of humanity.

The 2022 Proof Niue Colorized Silver Disney Bambi and Thumper Coin presents the brilliant mirror-like backgrounds of a true proof-quality collectible and vivid colorized artwork that celebrates the iconic best-friend duo. It ships in a special-edition 80th Anniversary display case, and a Certificate of Authenticity on the back of the case specifies each coin’s unique number in the mintage.

The obverse side features an effigy of Queen Elizabeth II to confirm its standing as legal tender of Niue. It’s accompanied by the inscriptions “ELIZABETH II,” “NIUE,” “TWO DOLLARS,” and “2022.”

The reverse side is a still of a classic scene from Bambi featuring the title character and their best friend, Thumper. Patches of frosting accentuate the silver to enrich the design.

If you need more information when buying silver, contact our team at JM Bullion. We are available via e-mail, online live chat, or by phone at 800-276-6508.