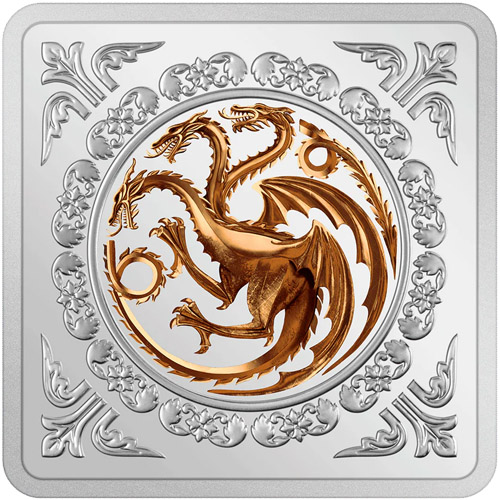 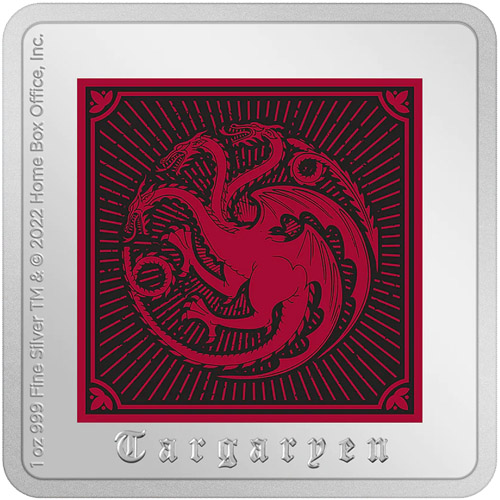 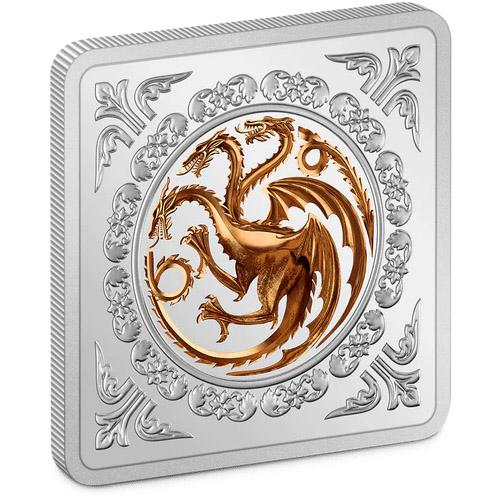 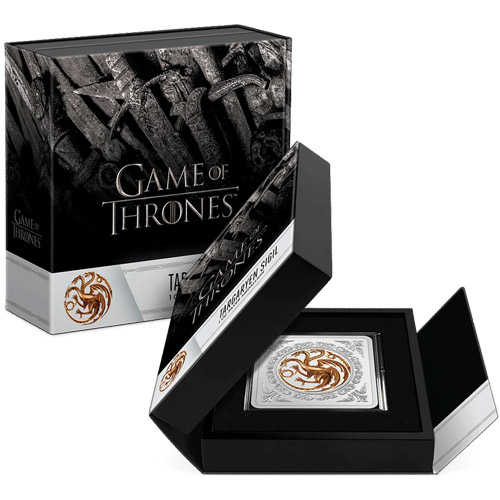 House Targaryen is one of the most unique of the feuding noble Houses whose bloody deeds throw the fantasy world of Westeros into chaos inGame of Thrones.An offshoot of a lost civilization of Dragonlords on a foreign continent, the Targaryens conquered the Seven Kingdoms of Westeros centuries before the War of Five Kings that provides the central drama of the epic fantasy show (and the books by G.R.R. Martin on which it was based). The first royal house of the Kingdoms, theirs was a lineage replete with both greatness and madness, their symbol the very three-headed dragon seen on the 2022 1 oz Colorized Niue Silver Game of Thrones Targaryen Sigil Medallion.

Shaped as a rectangular badge, the first issue in the New Zealand Mint’sGame of Thronescollection is devoted to House Targaryen, the original royal house of the Seven Kingdoms of Westeros: a lineage of dragon-riders, oracles, and more-than-occasional madmen whose centuries-long legacy was highly ambiguous as a result. It was the madness of the most recent Targaryen king that led to the fall of their House from the Iron Throne and eventually to the disastrous War of Five Kings seen in both the show and the novels that provided most of its source material. Known for silver-golden hair and violet-purple eyes, the Targaryens went to great lengths to keep their bloodline pure.

The 2022 Colorized Niue Silver Game of Thrones Targaryen Sigil Medallion carries the House’s sigil in variants on either side, and comes in a beautiful custom-made coin case, nestled in black velvet. The packaging features the series logo and a close-up image of the Iron Throne, and each medallion comes fully ensured against any possibility of loss or damage from the team at JM Bullion.

The medallion’s reverse side is gracefully engraved with a stylized border in pure silver against a brilliant mirrored backdrop, its center dominated by a gilded rendition of the Targaryen sigil. The three heads of the dragon represent the three legendary beasts that the original conquerors of Westeros rode into battle.

A colorized red and black version of the same sigil appears on the medallion’s obverse side in a visual style reminiscent of the European medieval livery that inspired many of the designs inGame of Thrones. It’s accompanied by the inscription “Targaryen,” a verification of the medallion’s silver contents, and the copyright and trademark of HBO, Inc.

Feel free to contact JM Bullion at 800-276-6508 to learn more about these silver coins for sale. You can also reach us by e-mail or through our convenient live chat.