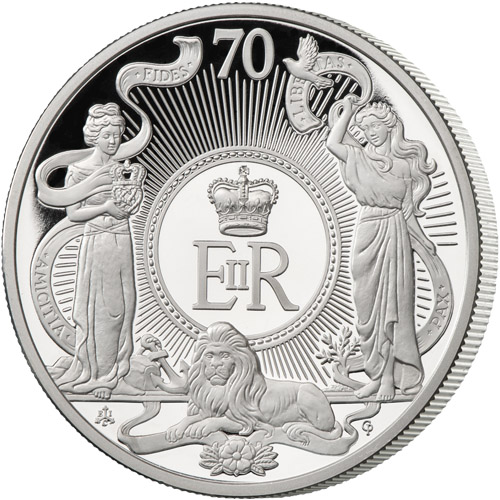 In 2022, the Issuing Authority of St. Helena and the East India Company continued a partnership that produces silver and gold bullion coins for the British Overseas Territory by releasing an exciting one-time collection. The Queen’s Platinum Jubilee collection celebrates the 70th year of Queen Elizabeth II’s reign with various coins available to collectors. Now, 2022 1 Kilo Proof St. Helena Silver Queen’s Platinum Jubilee Coins are available to you for purchase online from JM Bullion.

Queen Elizabeth II has been the Queen of the United Kingdom since 1952. On February 6, 1952, she ascended to the throne following the death of her father, King George VI. Today, the Queen is the head of state for England and serves as the Head of the Commonwealth, presiding over a group of nations that includes 53 independent states and some 2 billion people.

Over the course of her reign, has set one record after another in terms of longevity. She surpassed her great-grandmother, Queen Victoria, in 2012 to become the longest-reigning monarch in British history. Five years later, she became the first British monarch to celebrate a Sapphire Jubilee. In 2022, she becomes the first monarch in British history to celebrate a Platinum Jubilee.

Queen Elizabeth II features in right-profile relief on the obverse of 2022 Proof St. Helena Silver Queen’s Platinum Jubilee Coins. This effigy of Her Majesty was created in 2015 by Jody Clark for the use of the Royal Mint. It has since found its way onto the coinage of several other Commonwealth nations.

Two female allegories are featured in the reverse design of the 2022 1 Kilo Proof Silver Queen’s Platinum Jubilee Coins. These figures represent the characteristics of friendship, loyalty, peace, and freedom. These figures are accompanied by the image of a lion representing the Lion of England.

These 2022 1 Kilo Proof St. Helena Silver Queen’s Platinum Jubilee Coins are available to you in protective boxes for delivery. Each coin comes with a Certificate of Authenticity from the East India Company.

JM Bullion customer service is available to assist you with questions about silver for sale at 800-276-6508. Additionally, you can chat with us live online or email us directly.