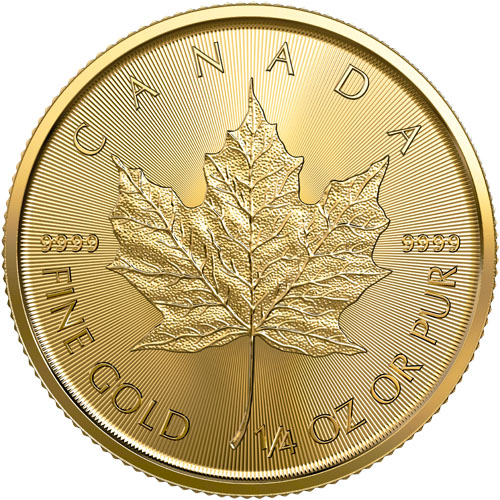 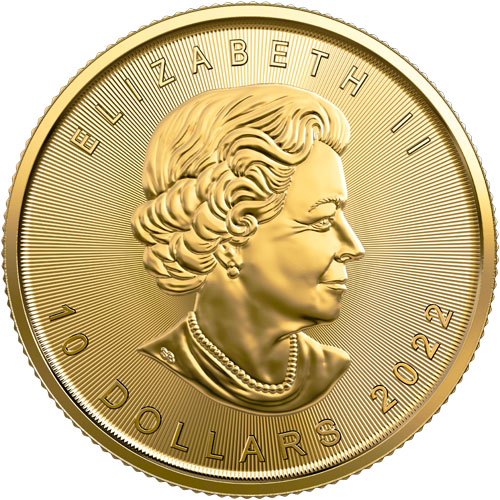 The Canadian Maple Leaf bullion series debuted in 1979 with gold for sale as the first option for investors. From that initial release of 1 oz gold coins, the Royal Canadian Mint expanded the collection over the next 35 years to include four additional fractional-ounce gold coins, a 1 Gram gold coin, a silver bullion coin, a platinum bullion coin, and a palladium bullion coin. Right now, 2022 1/4 oz Canadian Gold Maple Leaf Coins are available to purchase online at JM Bullion.

The 1979 release of the 1 oz Gold Maple Leaf marked the start of a series that would go on to become one of the world’s most popular gold bullion collections. The series offered only the 1 oz weight from 1979 to November 1982. In November 1982, the Royal Canadian Mint both enhanced the fineness of the coins from .999 to .9999 and also introduced two fractional-ounce gold coins. One of those two was the 1/4 oz gold coin.

The obverse of 2022 Canadian Gold Maple Leaf Coins features the latest effigy of Queen Elizabeth II. This is the fourth-generation portrait of the Queen and shows Her Majesty wearing earrings and a necklace in right-profile relief. The Queen’s effigy has appeared on Canadian coins throughout her reign in right-profile relief, an offset from the left-profile portraits of her father, King George VI, during his reign.

On the reverse side of 2022 1/4 oz Gold Maple Leaf Coins is an image of the sugar maple leaf, the official emblem of the nation. The sugar maple has been used as an emblem by provincial governments and trading companies in Canada since the early colonial era when fur traders were establishing outposts throughout the nation. The coins of the Canadian Gold Maple Leaf Series feature radial lines in the background of the obverse and reverse fields, an element added to the coins in 2015.

If you have any questions, please don’t hesitate to ask. JM Bullion customer service is available to you at 800-276-6508, online using our live chat, and through our email address.