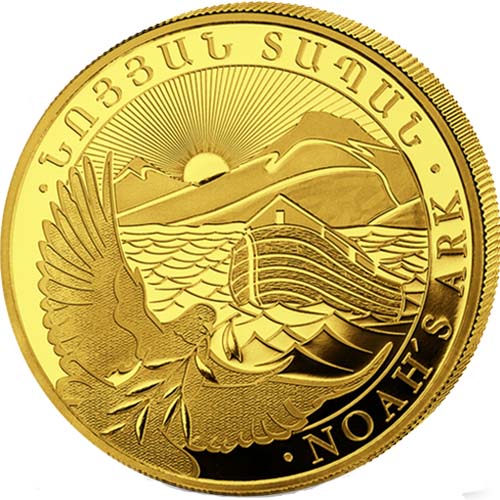 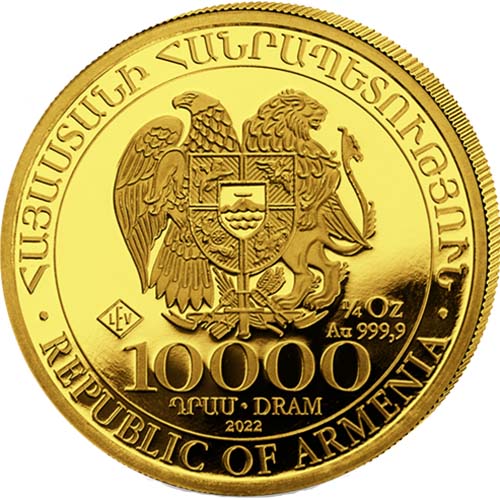 The Armenian Gold Noah’s Ark Coin Series now enters its third year in 2022 following its debut in September 2020. The expansion of the Noah’s Ark Series nearly a decade after its silver introduction in 2011 brings more investors into the fold in this German-produced series authorized as legal tender by the Central Bank of the Republic of Armenia. Now, 2022 1/4 oz Armenian Gold Noah’s Ark Coins are available to you for purchase online from JM Bullion.

The broader Noah’s Ark Series from the Republic of Armenia and Geiger Edelmetalle was introduced in 2011. That year saw the release of three silver bullion coins with the images still featured in the series to this day. The initial weights offered included 1 oz silver, 1/2 oz silver, and 1/4 oz silver.

In 2012, the series grew to feature 5 oz, 10 oz, 1 Kilo, and 5 Kilo silver coins for investors to purchase. In 2020, the first gold bullion coins were introduced in the series and included 1 oz, 1/2 oz, 1/4 oz, and 1 Gram gold coins. Unlike the silver series, the gold coins are all individually packaged by the mint.

The obverse of 2022 Gold Noah’s Ark Coins features the national coat of arms. The modern Republic of Armenia’s coat of arms connects the nation’s more recent history as a Soviet satellite republic to its ancient history as a Christian kingdom located in Eastern Europe. In the seal, you will see a quartered shield with a small emblem at the center bearing a depiction of Noah’s ark atop Mount Ararat. The larger shield is supported by a heraldic eagle and a heraldic lion.

On the reverse side of 2022 1/4 oz Armenian Noah’s Ark Coins is an image of the namesake ship. The bible tells us that Noah’s ark floated on the floodwaters for 40 days and 40 nights, with the vessel eventually coming to rest atop Mount Ararat as the floodwaters subsided. This design shows the hope of a new day as the waters begin to drop, the sun rises over Mount Ararat, and a dove returns to the ark with an olive branch.

These 2022 1/4 oz Armenian Gold Noah’s Ark Coins are available to purchase in Brilliant Uncirculated condition. Each coin is packaged in a security capsule with an included Certificate of Authenticity.

Phyllis from - April 21, 2022
"I just received my very first purchase of gold. I was very very pleased. So beautiful!!!! I will treasure this piece not only for its value but it’s biblical meaning. Thank you so very much."