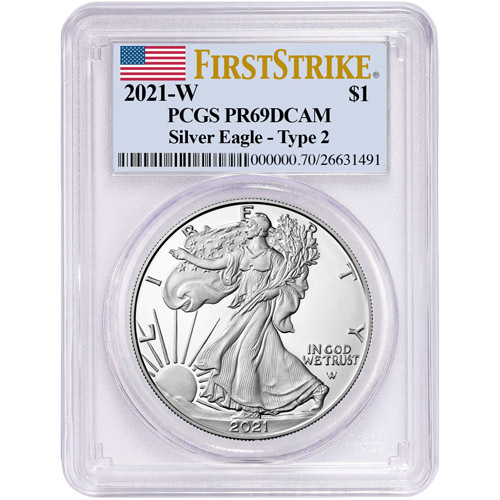 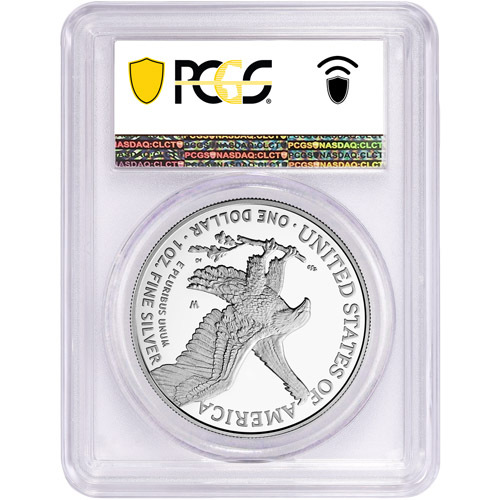 The Proof American Silver Eagle Coin Series is off in a new direction starting with the Type 2 release of 2021-dated coins. The US Mint started the 2021 production cycle with the original combination of Walking Liberty and the Heraldic Eagle. It now transitions with its Type 2 release to the Walking Liberty and Soaring Eagle designs. Now, 2021 1 oz Proof American Silver Eagle Coins are available to you for purchase online in near-perfect condition from JM Bullion.

When the Proof American Silver Eagle was first issued in 1986, it featured the image of Walking Liberty on the obverse and the Heraldic Eagle of the United States on the reverse. The latter design was created by US Mint Assistant Engraver John Mercanti and offered a modern rendition of a design that has appeared on American coins since 1794.

With the 35th anniversary of the series in 2021, the US Mint has refreshed the reverse image of the bald eagle. Gone is Mr. Mercanti’s version of the heraldic eagle. In its place, a new vision of the bird soaring through the sky. Emily Damstra, a member of the US Mint Artistic Infusion Program, created this new reverse visual.

Obverse visuals on the 2021 1 oz Proof American Silver Eagle Coin continue to feature Adolph A. Weinman’s 1916 design. Known as Walking Liberty, it depicts her figure in left-profile relief with the American flag draped around her as she strides toward the sun on the horizon. This side of the coin now features Weinman’s original “AW” signature mark with the Type 2 release.

Reverse elements of the 2021 Proof American Silver Eagle Type 2 Coin now depict a bald eagle in flight. The bird stretches its wings back as its talons clutch a large oak branch. Ms. Damstra chose the oak branch as it is a well-known symbol of strength and durability. Another new feature of Type 2 coins is the inclusion of a variation in the reeded edge as a means of providing anti-counterfeiting defense for the coins.

These 2021 1 oz Proof American Silver Eagle Coins are near-perfect specimens. PR69 coins showcase full, original mint luster and have a maximum of two minor flaws. These detractions are limited to only minuscule contact marks or hairlines and must be outside the primary focal points. As deep-cameo coins, these specimens have strong, frosted designs with deeply-mirrored, clear fields. First Strike coins are those received for grading within 30 days of the US Mint’s release.