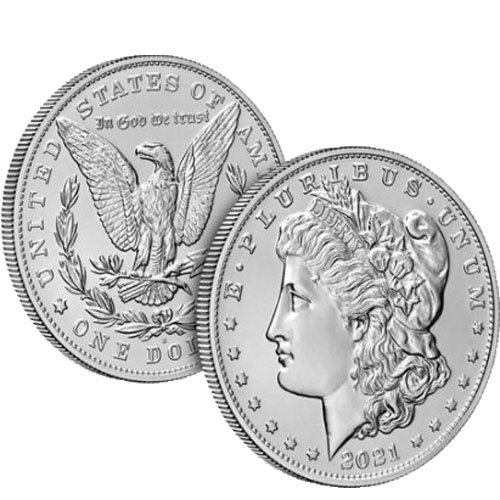 Each 2021-S Morgan Silver Dollar Coin available in this JM Bullion listing comes with protective packaging from the United States Mint. The coins are directly housed in capsules and presented in black US Mint boxes with a Certificate of Authenticity included. These coins were struck by the San Francisco Mint in honor of its original role in coining the Morgan Dollars in the 19th and early-20th centuries. There is an S mint mark on the reverse of the coin.

The obverse side of 2021-S Morgan Silver Dollars comes with a depiction of Lady Liberty. Designed by George T. Morgan in his first year working at the US Mint, the effigy shows Liberty in left-profile relief with 13 stars around her figure, a Phrygian cap on her head, and the coronet and wreath crowns on her head as well.

On the reverse face of 2021-S Morgan Silver Dollar Coins is an image of the heraldic eagle. Morgans 19th-century version of the heraldic eagle was one of the few of the era on American coins to lack the US national shield. It did feature the bald eagle in front-facing relief with the arrows of war and the olive branch of peace in its talons.

If you have questions, JM Bullion is here to help. Please call us at 800-276-6508, chat with us live online, or simply send us an email with your inquiries.