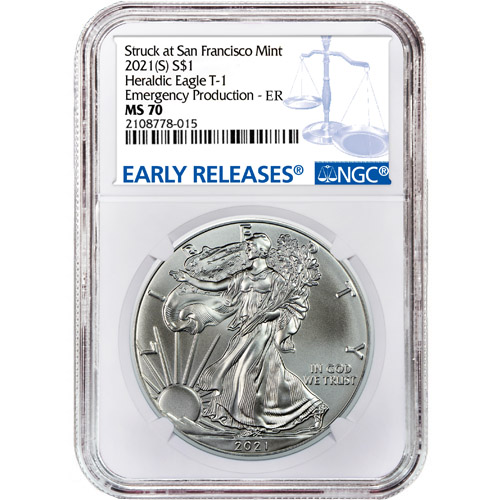 Each of these 2021 (S) 1 oz American Silver Eagles comes to you in perfect condition according to the NGC. Coins in Mint State 70 condition exhibit full, original mint luster and bear no detracting flaws of any kind on the design elements or background fields. The Early Release label means that each coin was received by the NGC inside the initial 30-day window following release by the United States Mint.

Walking Liberty is displayed in the obverse design of 2021 (S) 1 oz American Silver Eagles. Adolph A. Weinman came up with this vision of Liberty in 1916. It depicts Liberty in left-profile relief as she walks toward the sun on the horizon with her right hand reaching out for its warmth as her left hand carries branches of oak and laurel. The American flag is draped over her shoulders as she walks along.

The heraldic eagle of the United States is on the reverse of the 2021 (S) American Silver Eagle. This is the final issue of the heraldic eagle on the coins and it depicts the bald eagle with its wings spread wide as it supports the US national shield.

Please note that these 2021 (S) 1 oz American Silver Eagles have no mint marks. When shipped from the US Mint in its Monster Boxes, the coins are often identifiable as San Francisco products by the straps and serial numbers on the box.

If you have any questions, please contact JM Bullion. Our customer service team is available at 800-276-6508, online through our live chat, and using our email address.