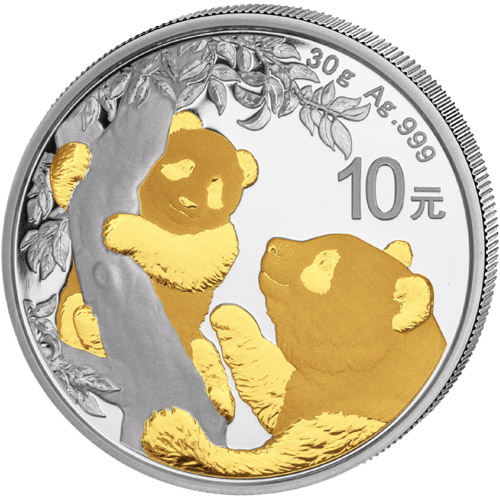 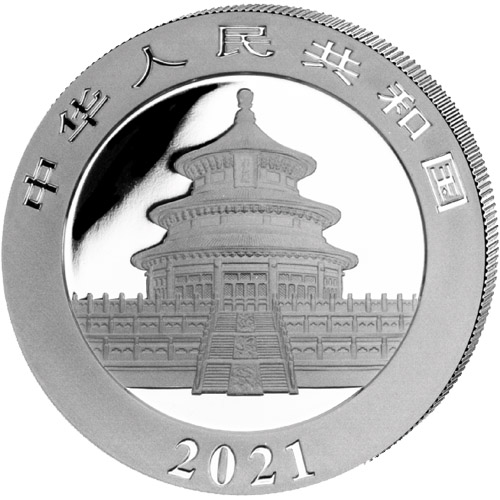 Chinese Silver Panda Coins are offered annually by the Chinese Mint with a Brilliant Uncirculated option as the only choice since 2000. The Chinese Mint will use the BU version of the coin for special privy-mark issues to celebrate specific occasions, but those aren’t the only options available to collectors. You can find BU silver coins in this series available with colorized and gilded finishes. Now, 2021 30 Gram Chinese Silver Panda Coins with a gilded finish are available to you for purchase online from JM Bullion.

From 1989 to 1999, the Chinese Mint released the annual coins with BU and Proof versions. In 2000, the mint ceased issuing annual proof versions of the coin. However, this didn’t mean the end of coins with enhanced visuals and limited mintages. From the release of BU coins each year, small batches are devoted to colorized and gilded releases. Each one is altered after production at the Chinese Mint.

On the obverse of the 2021 30 Gram Chinese Silver Panda is a depiction of two Giant Pandas. The unique bear species is native to the central highlands of China and is distinctive with its black-and-white fur patterns. These particular coins feature the new 2021 design with a Giant Panda cub climbing a tree trunk as its mother panda looks on. This face of the silver coins comes with a thin layer of gold applied to the pandas in the obverse design element.

These 2021 30 Gram Chinese Silver Pandas are available in Brilliant Uncirculated condition and come with individual protective capsules. The coins have a thin layer of 24-karat gold on the obverse. This gold layer is not enough to drastically alter the precious metal value of the coins, but it does provide between contrast in the combination of the two most beloved precious metals.

JM Bullion customer service is available to answer your questions about silver for sale at 800-276-6508. We are also available online through our live chat and email address features.