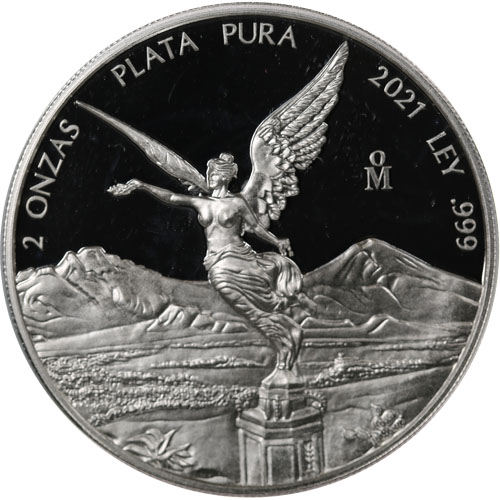 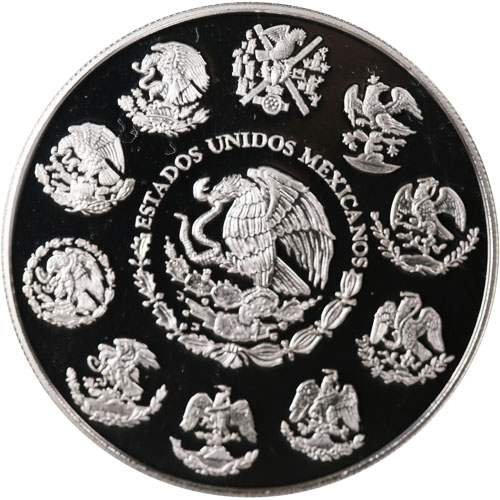 The Mexican Silver Libertad Series is available from the Mexican Mint annually in Brilliant Uncirculated, Proof, Reverse Proof, and Antique silver coins. Among the weights available in these collections, the 2 oz proof is one of only three coins among the eight weights that comes in all four of these different versions. Now, 2021 2 oz Proof Mexican Silver Libertad Coins are available to you for purchase online from JM Bullion.

There was only one other coin to be introduced after 1996, and that was 2002 when a 1 kilo proof-like coin was introduced in the series. There are now eight weights in total in this series, with the heavier weights often boasting some of the lowest mintage figures in the series. For example, the highest mintage figure recorded in the 2 oz silver weight was the 2009 release with 6,200 coins sold. More recently, 5,000 coins were sold in 2018.

Obverse design elements on the 2021 2 oz Proof Mexican Silver Libertad Coins include the modern coat of arms and 10 historic versions of the emblem. The design features a Mexican golden eagle in left-profile relief as it uses its talons and beak to try to exercise control over a rattlesnake. The duo is depicted on the arm of a prickly pear cactus as the battle between the creatures ensues. Around the design element, you will find 10 historic versions of the coat of arms that includes the original design that inspired the modern symbol at the 12 oclock position.

Reverse features of the 2021 Proof Mexican Silver Libertad Coins come with a depiction of the statue of Winged Victory. A symbol of Mexicos success in its war against Spain for independence, Victory is based on the Roman goddess Victoria that was worshipped by victorious generals following victory in war.

JM Bullion customer service is available to assist you with any questions at 800-276-6508. We are also available to you online through our live chat and email address features.