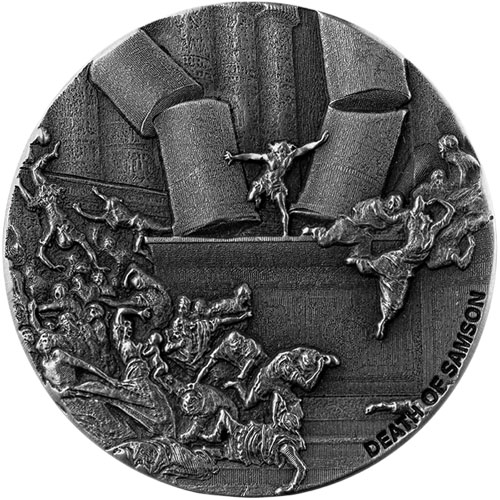 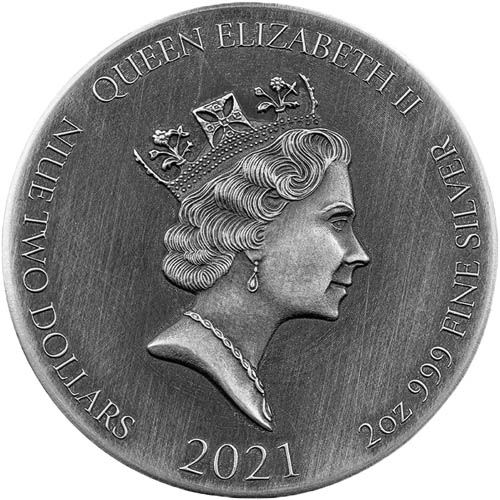 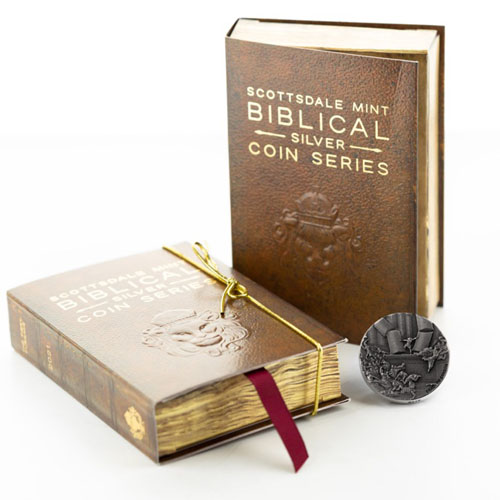 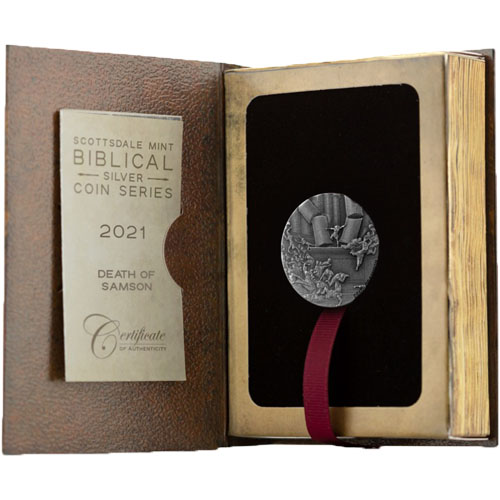 The silver bullion coins in the Biblical Series from the Scottsdale Mint are the perfect collectible items for any religious believer or historian. These beautiful 2 oz silver coins offer limited mintages, rimless blanks, custom packaging, and an ongoing series of fresh reverse designs that includes six new images per year dating back to 2015. Today, 2021 2 oz Death of Samson Biblical Series Silver Coins are available to you online at JM Bullion.

Samson is one of the major figures of the Hebrew Bible. He is featured prominently in the Book of Judges and is the last of the judges in Ancient Israel. Though mentioned in the Bible, modern scholars liken the stories of his achievements and powers to folk heroes such as Heracles from Greek mythology.

All of the 2021 2 oz Death of Samson Biblical Series Silver Coins are available to you with presentation boxes from the Scottsdale Mint. The coins are packaged in Bible-themed displays that come with passages from the Bible that describe the scene on the reverse on a Certificate of Authenticity. Each coin has a rimless blank with high-relief strikes and an antique polish. The coins also come with a unique serial number laser-etched on the edge of the piece.

On the obverse of 2021 Death of Samson Biblical Series Coins is an effigy of Queen Elizabeth II. Her Majesty is shown here in right-profile relief wearing the George IV State Diadem Crown. This portrait was developed in 1985 by Raphael Maklouf and featured on British coins as the third-generation effigy from 1985 to 1997.

The reverse side of 2021 2 oz Death of Samson Silver Coins is a depiction of Samson pushing over the pillars supporting the temple where the Philistines had gathered to mock him during a performance. Samson had superhuman strength gifted to him by God, but his long hair was the source of his strength.

His lover Delilah had cut his hair and betrayed him to the Philistines, who later imprisoned him. When the people of Philistine and the leaders of Philistia gathered in the temple of Dagon, Samson asks to be chained to the support columns so he can rest. As Samson prays to God, his immense strength is restored and he collapses the columns. As a result, Samson dies along with some 3,000 people who had gathered to see him.