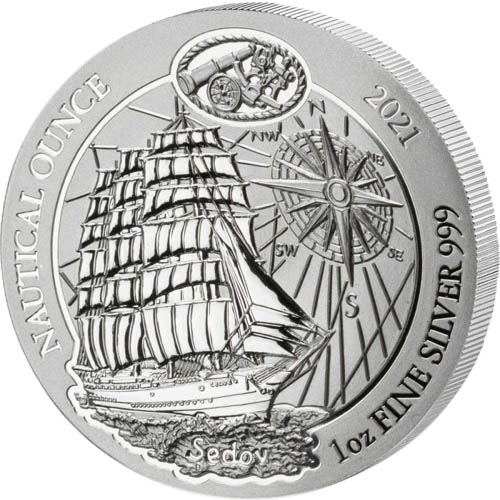 As low as $7.99 per coin over spot!
Add to WishlistLog In to add this product to your Wishlist
Free Shipping on $199+ Orders

In 2021, the Rwandan Nautical Ounce Series features the first ship that is still afloat today. After starting the collection with ships that sailed the seas between 550 and 250 years ago, the collection now features one of the largest sailing ships ever built. Now, 2021 1 oz Rwandan Silver Sedov Nautical Ounce Coins are available to you for purchase online from JM Bullion.

The Sedov, known as the STS Sedov today, is a four-masted steel ship that was built a century ago in 1921. The ship held the honor of being the largest traditional sailing ship still in operation for more than 80 years. Built for Germany in the inter-war period in the early 20th century, the Sedov transferred ownership after World War II.

When it was built in 1921, the Sedov was named the Magdalene Vinnen II. It was built in Kiel, Germany, by Friedrich Krupp Germaniwerft. The original purpose of the ship was to serve as a cargo vessel. Today, it is used as a training vessel for sailors learning how to operate and navigate sailing vessels.

The obverse of 2021 1 oz Rwandan Silver Sedov Nautical Ounce Coins comes with a depiction of the STS Sedov. The Sedov is known for its four massive masts and its displacement of 7,300 long tons. The ship measures just over 385 feet in length. During its history as a German ship, the sailing vessel crossed the Atlantic Ocean from Germany to Buenos Aires, Argentina, in September 1921. From there, the ship made additional voyages around Cape Horn to Chile.

On the reverse side of the 2021 Rwandan Silver Sedov Nautical Ounce Coin is an image of the Rwandan coat of arms. The national seal features a traditional woven basket with branches of coffee and sorghum. These elements are flanked by traditional warriors shields and topped by the sun.

These 2021 1 oz Rwandan Silver Sedov Nautical Ounce Coins are available to you in Brilliant Uncirculated condition. The silver coins for sale in this series come individually in plastic pouches or by multiples of 10 in sealed sheets.

JM Bullion customer service is available to assist you at 800-276-6508. We are also available to help you online through our live chat and email address features.