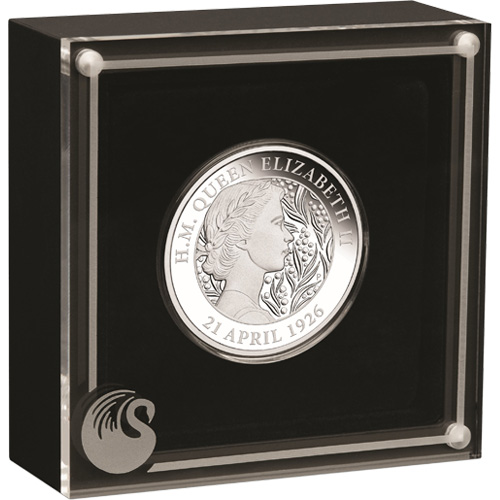 Born in 1926, Queen Elizabeth II celebrates her 95th birthday in 2021. The longest-lived and longest-reigning monarch in British history, Elizabeth II has sat on the throne of England and provided a steady hand for the nation since 1952 when her father, King George VI, died. Today, 2021 1 oz Proof Australian HM Queen Elizabeth II 95th Birthday Silver Coins are available to you online from JM Bullion.

Queen Elizabeth II was born Elizabeth Alexandra Mary Windsor on April 21, 1926. She is the eldest child of King George VI and Elizabeth Bowes-Lyon, and was third in the line of succession when she was born. At that time, King George V was the reigning British monarch and his first-born son, Edward, was first in line. After George V died in 1936, Edward became King Edward VIII, but reigned for less than a year as he abdicated the throne to his brother, King George VI. This made Elizabeth second in line to the throne. Following her fathers death, she became Queen Elizabeth II.

All of the 2021 1 oz Proof Australian HM Queen Elizabeth II 95th Birthday Silver Coins in this listing come to you with a classic Perth Mint display. This display case includes a clear lid and ships with a themed shipping sleeve. A numbered Certificate of Authenticity is available with all coins.

On the obverse of the 2021 Proof Australian HM Queen Elizabeth II 95th Birthday Silver Coins is an effigy of Her Majesty. This design is the most recent edition of her effigy for British and Commonwealth coins. It was developed in 2015 by Jody Clark and has featured on Australian coins as the sixth-generation design for this nation since 2018. The portrait depicts the Queen at the age of 89 with the George IV State Diadem Crown.

The reverse side of 2021 1 oz Proof Australian Queen Elizabeth II 95th Birthday Silver Coins comes with an image of the Queen. This design is the first-generation portrait of the Queen that was developed at the start of her reign in 1952. It was developed by Mary Gillick and featured on British coins until its replacement in 1965.

Please feel free to contact JM Bullion if you have any questions about these silver coins for sale. Our team can assist you at 800-276-6508, chat with you live online, or respond in writing via email.