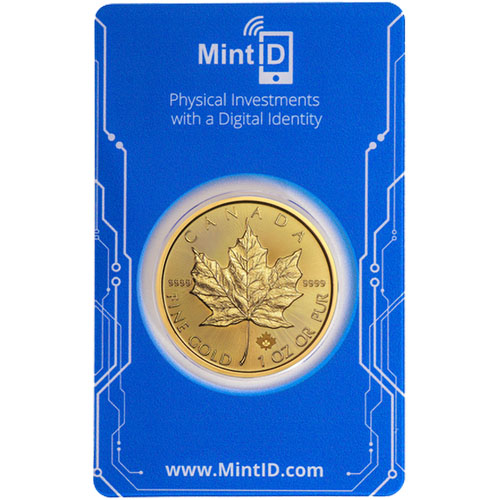 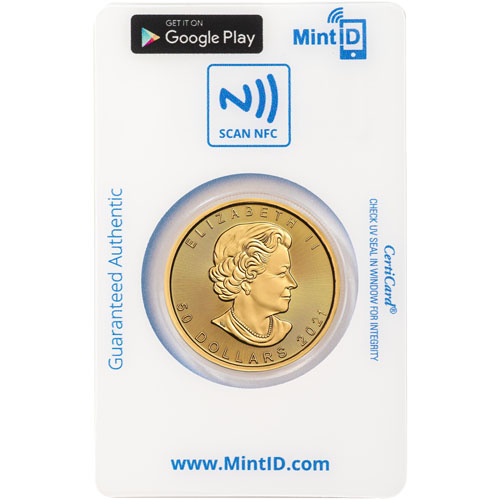 Canadian Gold Maple Leaf coins were introduced by the Royal Canadian Mint in 1979. At that point in time, the only gold bullion coin available for private ownership was the South African Gold Krugerrand, a specimen that had dominated the global gold bullion marketplace for more than a decade. The Canadian Gold Maple Leaf is available in five weights each year, but its most popular option remains the 1 oz gold version.

All of these 2021 1 oz Canadian Gold Maple Leaf Coins are available to you as Brilliant Uncirculated specimens. These coins are housed inside of special packaging from MintID. The sealed, secure MintID certificate card houses the coin inside of a capsule at the center with the MintID logo on both sides of the card, and an NFC microchip on the reverse.

MintID’s exclusive, encrypted NFC microchips connect you directly to an individual profile for each coin that is stored digitally in the cloud. Using the MintID app on your smartphone, you can use NFC technology in your phone and the chip to scan the NFC field and instantly view the details of the individual coin you are holding in your hand. Each NFC microchip is secured with 128-bit encryption that is designed to self-destruct if any attempts to tamper with it are detected. To use the MintID app, your smartphone must be running iOS 13.0 or later or Android 4.2 or later.

On the obverse of the 2021 1 oz Canadian Gold Maple Leaf Coin is a depiction of Queen Elizabeth II. This is the fourth-generation portrait of the Queen to feature on Canadian currency and was designed in 2003 by Susanna Blunt, just the second Canadian artist ever to create a monarch portrait for Canadian coins.

The reverse face of 2021 Canadian Gold Maple Leafs features the original sugar maple leaf design. Created in 1979 by Walter Ott, this image of the national symbol has featured on all versions of Canadian Maple Leaf bullion coins, from these gold coins to the silver, platinum, and palladium variants. This face of the coin features the maple leaf privy mark introduced in 2013 that is micro-laser engraved. Inside the privy mark are the final two digits of the date mark, “21,” that are visible only under magnification.

Please contact JM Bullion with any questions. Our team is available to you at 800-276-6508, online through our live chat, and using our email address.