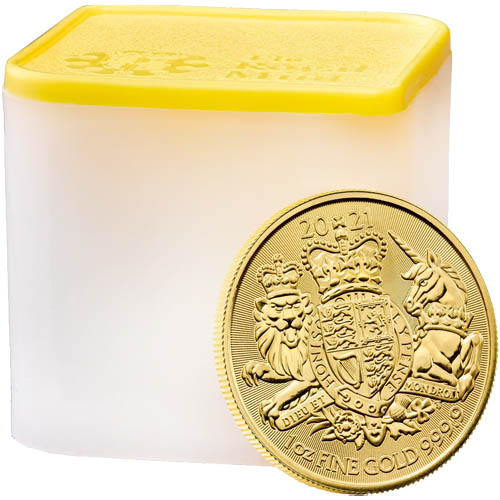 In 2019, the Royal Mint of England introduced one of its most ornate and beautiful representations of the monarchy to ever appear on gold coins from the nation. The Royal Arms Series offers silver and gold coins for sale, each of which has the modern Royal Arms depicted on the reverse field. Today, 2021 1 oz British Gold Royal Arms Coins are available to you online from JM Bullion.

The history of the Royal Arms, as it is known for short, in the United Kingdom is one that dates back to at least the 8th and 9th centuries. Before England was a singular kingdom, Saxon and Danish rulers of the separate kingdoms in Britain used heraldic beasts in coat of arms designs representing their kingdoms. With the eventual formation of a single England, the lion became a popular heraldic beast in the seals and badges of the early monarchy. It was King Richard I, the second Plantagenet king, who adopted an official Royal Arms with the Three Lions designs.

On the obverse side of 2021 British Gold Royal Arms Coins, you will find the effigy of Queen Elizabeth II introduced in 2015. Launching on 2016-dated coins, this right-profile bust of the Queen is the fifth-generation portrait of Her Majesty on British coins and showcases the monarch at the age of 89.

The reverse field of the 2021 1 oz British Gold Royal Arms Coins includes a depiction of the modern Royal Arms. The symbol includes a crowned shield at the center that is quartered, with the coats of arms from England, Scotland, and Northern Ireland in the quadrants. The shield is topped by the Imperial State Crown and supported on its sides by the Lion of England and Unicorn of Scotland.

Please feel free to reach out to JM Bullion with any questions. You can call us on the phone at 800-276-6508, chat with us live online, or email us directly.