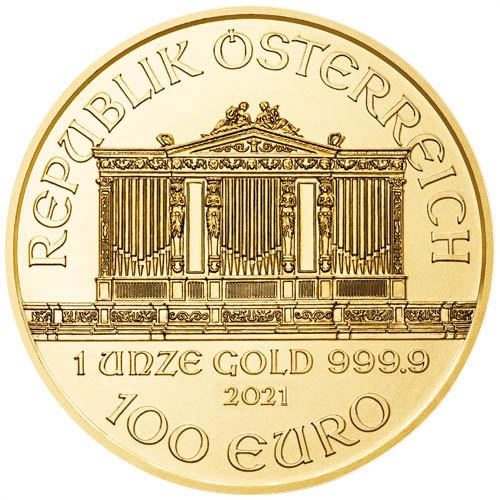 In 2002, the common currency of the Eurozone economy was introduced in the form of the Euro. This new currency replaced the individual fiat currencies of nations such as Italy, Spain, France, Germany, and Austria. As a result, the face values assigned to Gold Philharmonic Coins were adjusted to reflect values in Euros. The 1/25 oz coin in this series, released in 2014, is the only gold coin in the collection never issued with Austrian Schillings.

The obverse side of 2021 1 oz Austrian Gold Philharmonic Coins includes a depiction of the Great Organ, a large pipe organ found within the Musikverein. Also known as the Golden Concert Hall, this is the venue where the Vienna Philharmonic Orchestra holds its performances in Vienna. The concert hall is located within the Innere Stadt neighborhood of Vienna, the capital city of Austria.

On the reverse face of the 2021 Austrian Gold Philharmonic Coin is a design with eight musical instruments. The array of instruments includes a cello in the center, two violins on either side, and a French horn, a bassoon, and a harp in the background field.

These 2021 1 oz Austrian Gold Philharmonic Coins are available in Brilliant Uncirculated condition. Coins in this collection ship inside of individual plastic flips or tubes of 10 gold coins from the Austrian Mint.

JM Bullion customer service is available to assist you with questions at 800-276-6508. We are also available to you online through our live chat and email address features.

Scott from - April 21, 2021
"These are such a beautiful classic coin. Gorgeous stamping."