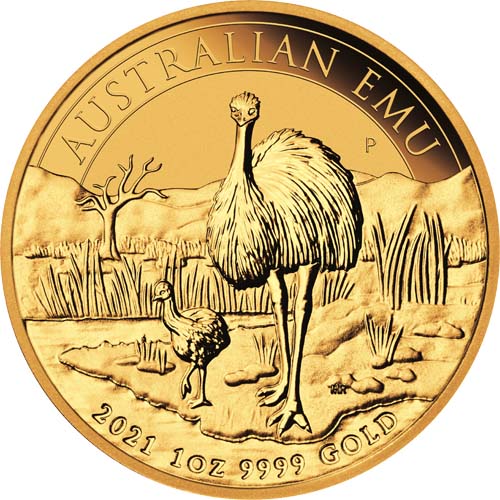 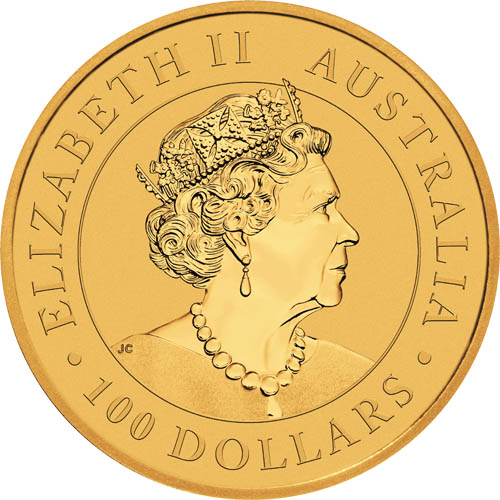 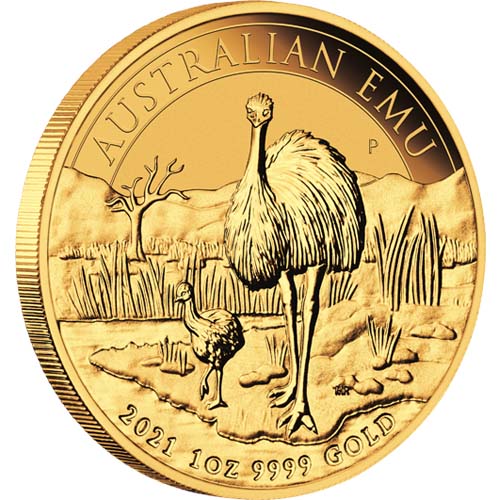 Each of the 2021 1 oz Australian Gold Emu Coins comes in Brilliant Uncirculated condition. Individual coins ship inside of plastic capsules. Multiples of 20 coins come in rolls, while multiples of 100 coins come in Monster Boxes.

The Australian Emu Series launched at the Perth Mint in 2018. The collection offers 1 oz silver and 1 oz gold coins in a Brilliant Uncirculated release, with proof versions available in the silver range.

The obverse side of 2021 Australian Gold Emu Coins comes with a portrait of Queen Elizabeth II. Her Majesty is featured here in right-profile relief in the sixth-generation portrait used on Australian coinage. Developed in 2015 by Jody Clark, it first appeared on British coins with the 2016 date mark and has now been widely adopted on Australian coinage. In the portrait, the Queen wears the George IV State Diadem Crown.

On the reverse of 2021 1 oz Gold Emu Coins is an image of two emus. Within the emu species, the mother may lay the egg, but it is the father that cares for the egg and the young hatchling. As such, it is most likely a father-hatchling duo in this design that shows the two emus near a small watering hole.

Founded in 1899, the Perth Mint is the oldest operating mint facility in Australia. It was originally opened to serve as the third branch facility of the Royal Mint in Australia. Following federation, the closure of the Sydney and Melbourne Mint, and the eventual founding of the Royal Australian Mint, the Perth mint not only became the oldest mint in the nation, but it also became the only state-owned mint. While the sovereign mint is controlled by the federal government, the state of Western Australia controls the Perth Mint.

If you have any questions, please contact JM Bullion. Our team is available on the phone at 800-276-6508, online using our live chat, and via our email address.