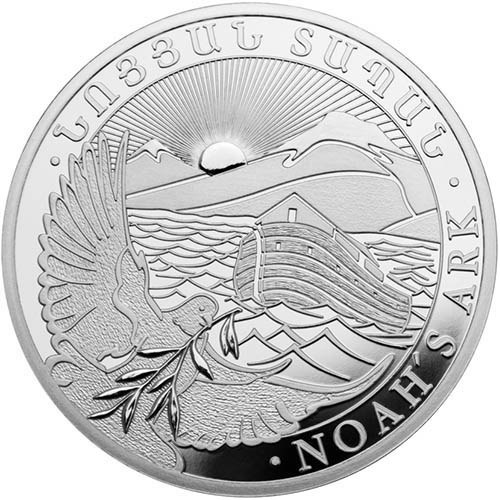 The Armenian Silver Noah’s Ark coin joined the world of precious metals silver bullion coins available to investors in 2011. The 2021 release of the coins will mark the official 10th anniversary of the program. Introduced with 1 oz, 1/2 oz, and 1/4 oz silver, the series now offers some of the most unique alternative silver weights with 5 oz, 10 oz, 1 Kilo, and 5 Kilo silver coins introduced in 2012. Today, 2021 1 oz Armenian Silver Noah’s Ark Coins are available to you online from JM Bullion.

The 1 oz silver coin in the Armenian Noah’s Ark Series is far and away the most popular coin in the series. In most years, the total mintage of 1 oz silver coins in the Noah’s Ark Series surpasses the combined mintage of the other six weights in the collection. For example, the 2019 1 oz Silver Noah’s Ark Coin sold a total of 725,001 coins. The next-closest coin was the 1/4 oz Silver Noah’s Ark Coin with a total mintage in 2019 of 337,001 coins.

All of the 2021 1 oz Armenian Silver Noah’s Ark Coins available in this JM Bullion listing come in Brilliant Uncirculated condition from the mint. The coins are housed individually in protective flips or come in acrylic tubes for multiples of 25 silver coins.

Obverse design elements on the 2021 Armenian Silver Noah’s Ark Coins include the national coat of arms for the Republic of Armenia. Adopted after the dissolution of the Soviet Union and Armenia’s emergence as a fully independent state, the seal is flanked by an eagle and lion with a quartered shield featuring different, historic images of the eagle and lion. At the center of the shield is a small crest with the image of Noah’s ark on the peak of Mount Ararat.

Reverse design visuals on 2021 1 oz Armenian Silver Noah’s Ark Coins feature Eduard Kurghinyan’s depiction of Noah’s ark. Based on the Biblical tale from the Book of Genesis that spoke of a flood God had sent to cleanse the world of the sins of humanity. In this design, the ark is seen floating on the floodwaters as the sun begins to rise and the rains have ended. In hopes of finding dry land, Noah has sent out a dove that is shown returning with an olive branch in its beak.

Please feel free to reach out to JM Bullion with any questions. You can call us on the phone at 800-276-6508, chat with us live online, or email us directly.

Colin from AZ - July 12, 2021
"It's a really beautiful coin, pictures don't really show how much of a proof like finish it has."