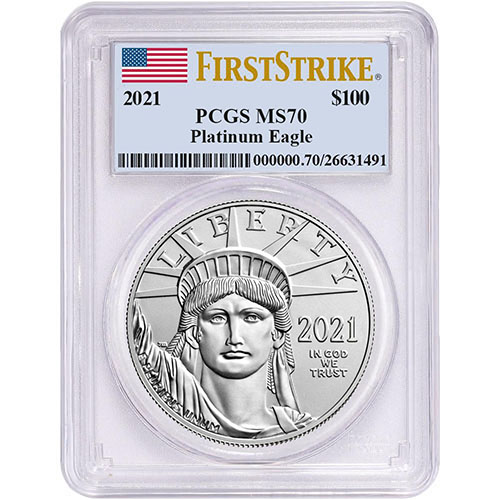 The United States Mint unveiled the third of four coins in the American Eagle bullion series in 1997. This was the American Platinum Eagle, a coin that was released initially with 1 oz, 1/2 oz, 1/4 oz, and 1/10 oz platinum in the BU and Proof collections. Since 2008, the only coin made available in the BU Series is the 1 oz platinum coin. JM Bullion offers the 2021 1 oz American Platinum Eagle Coin to you for purchase in perfect condition.

American Platinum Eagle Coins were released in the four aforementioned weights in both the Brilliant Uncirculated and Proof versions from 1997 to 2008. In 2009, all coins were suspended with the exception of the 1 oz proof coin. In 2014, the 1 oz BU coin was issued again for just one year. No BU coins were issued in 2015, but since 2016 the BU coins have been available again annually in 1 oz platinum.

All of the 2021 1 oz American Platinum Eagles are available in this listing with a perfect certification. A Mint State 70 coin has full, original mint luster and no detracting flaws present on the coin. The included First Strike label means these specimens were received for grading within 30 days of release from the US Mint.

The reverse field of the 2021 1 oz Platinum Eagle Coin comes with a design featuring the American bald eagle. Unique to the Platinum Eagle Series, it was created by Thomas D. Rogers and showcases the soaring bald eagle as it flies over the continent while the sun rises in the background.

John Mercanti’s career at the United States Mint started in 1974 when he joined the mint as a sculptor-engraver. His career culminated in 2006 with a four-year stint as the 12th Chief Engraver of the US Mint, a position he held until his 2010 retirement. Thomas D. Rogers worked for the US Mint at the Philadelphia Mint from 1991 to 2001. In addition to several reverse designs for the Platinum Eagle Series, he created the reverse of four coins in the State Quarters Series and the reverse of the Sacagawea gold dollars.

Please contact JM Bullion with questions. Our team is available at 800-276-6508, on the web using our live chat, and through our email address.