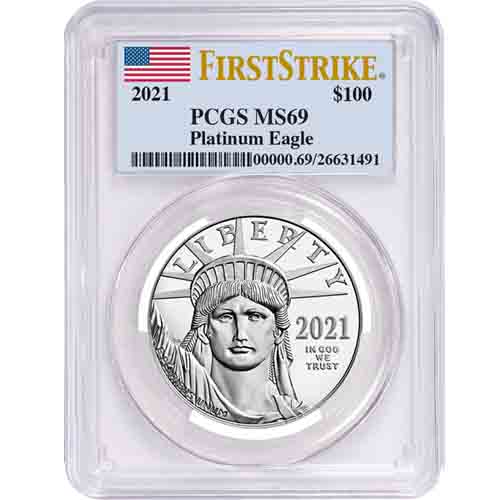 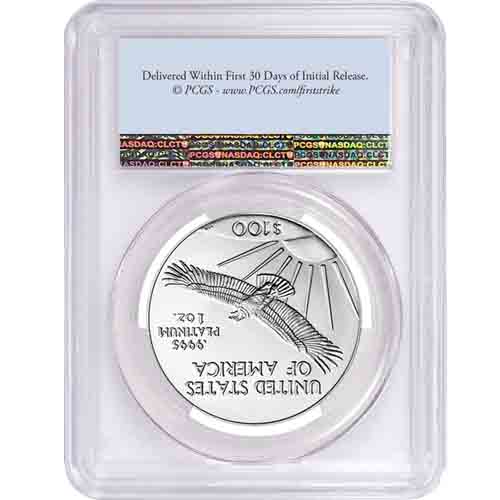 Each of the 2021 American Platinum Eagle Coins available in this JM Bullion listing comes with a near-perfect certification. The PCGS assigns Mint State 69 grades to coins that exhibit full, original mint luster with a maximum of two minor detracting flaws present. Those flaws must be located outside the primary focal points of the coin and are limited in nature to detractions such as minuscule contact marks or hairlines.

Included with these coins is a First Strike designation within the slab. A First Strike coin is one the PCGS receives from the US Mint for grading within the first 30 days of release during the 2021 production cycle.

American Platinum Eagle BU coins have been available only in 1 oz platinum since 2008. In fact, no coins were issued between 2009 and 2013. The restart of the Platinum Eagle Series was staggered at first, with a 2014 coin released, but not a 2015 coin. Since 2016, the mint has issued the BU Platinum Eagle each year.

For the obverse design element of 2021 1 oz American Platinum Eagles, John Mercanti’s Statue of Liberty design remains a constant. In use on the BU coin since 1997 and featured on the proof version from 1997 to 2017, this vision of Liberty captures the face of the statue with her towering crown as she gazes out over the Atlantic Ocean.

In the reverse field of 2021 American Platinum Eagle Coins, Thomas D. Rogers’ original reverse design continues to feature as well. This image depicts an eagle as it glides in flight over the nation with its wings steady, straight out at its sides.

If you have any questions, please feel free to ask. JM Bullion customer service is available to you at 800-276-6508, online through our live chat, and using our email address.