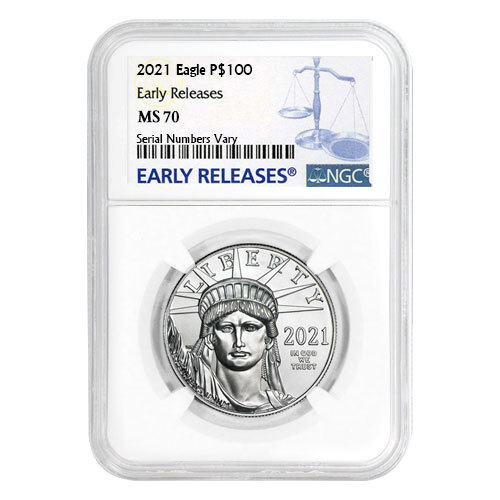 American Platinum Eagle Coins from the United States Mint are available on an annual basis in the Brilliant Uncirculated series as of 2016. The collection launched in 1997 and was available until 2008 before enduring a five-year hiatus in production. Since returning in 2016, the coin has seen mintage figures increased each year. Right now, 2021 1 oz American Platinum Eagle Coins are available to purchase online from JM Bullion in perfect condition.

Each of the 2021 1 oz American Platinum Eagle Coins available for you to purchase in this JM Bullion listing comes with a perfect grade of Mint State 70. Coins in this condition exhibit full, original mint luster and bear no detracting flaws of any kind on the design elements or surface areas. The Early Release label indicates the coins were received by the NGC within 30 days of the initial release date by the US Mint.

American Platinum Eagles were introduced by the United States Mint in 1997. The coins were available at first in Brilliant Uncirculated and Proof specimens, each one offering 1 oz, 1/2 oz, 1/4 oz, and 1/10 oz platinum coins. The series continued on with these options from 1997 to 2008. In 2009, all four BU specimens were canceled and the three fractional-ounce Proof specimens were canceled. The 1 oz Proof continued on as the only option until 2014 when a one-year issue of 1 oz BU coins was released. In 2016, the 1 oz BU returned to annual coining.