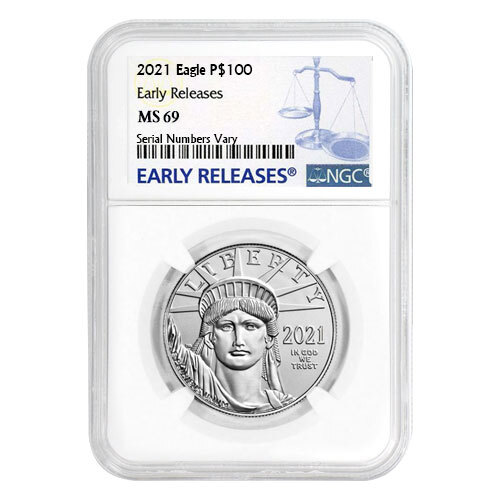 American Platinum Eagle coins are offered by the United States Mint on an annual basis. In a unique twist to this series, it is the proof coin that has been available every year since 1997. Meanwhile, the BU specimen was available during the first decade of production and was then suspended in six of the next seven years. Now, near-perfect 2021 1 oz American Platinum Eagle Coins are available to you for purchase online from JM Bullion.

The American Platinum Eagle was introduced by the US Mint in 1997. The series initially featured 1 oz, 1/2 oz, 1/4 oz, and 1/10 oz platinum coins in both the Proof and Brilliant Uncirculated versions. From 1997 to 2008, the coins were available across both versions in all four weights. In 2009, the fractional-ounce coins were suspended in both programs.

However, not only were the fractional-ounce coins suspended in 2009 in the BU series, but so too was the 1 oz platinum coin. The only coin available in the American Platinum Eagle Series from 2009 to 2013 was the 1 oz proof. A 1 oz BU coin was released in 2014, but suspended again in 2015. Since 2016, the 1 oz BU coin has once again resumed annual production.

These 2021 1 oz American Platinum Eagle Coins come with a near-perfect certification from the NGC. Coins in this condition showcase full, original mint luster and have no more than two minor detracting flaws. Those flaws are limited in nature to minuscule contact marks or hairlines and limited in scope to the areas outside the primary focal points. The ER label stands for Early Release and points to the arrival of the coins for grading within 30 days of the initial release by the US Mint.