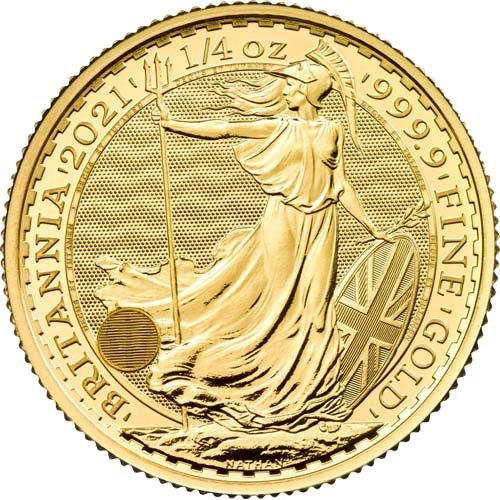 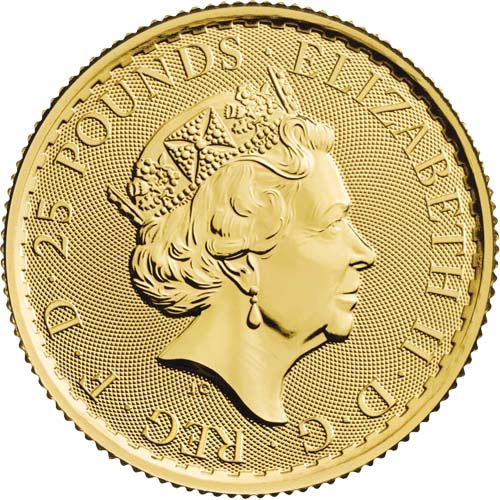 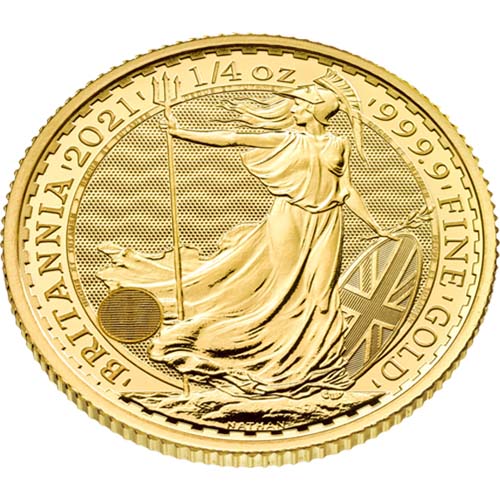 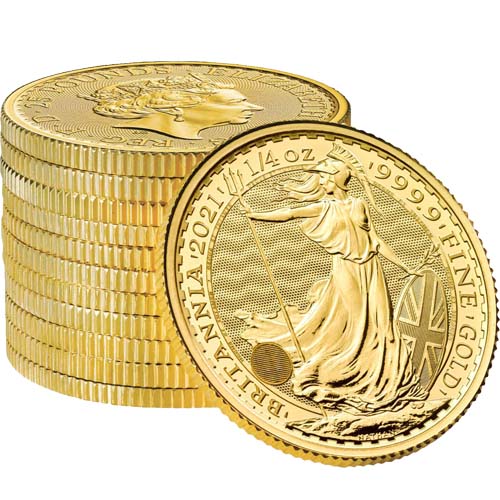 The 2021 release of the British Gold Britannia coins is one of the most substantial in recent history for the series. While the Gold Britannias continue into yet another decade of production with Philip Nathan’s ’stirring effigy of Britannia on the reverse, the Royal Mint has increased the security of the coins with four new features that provide peace of mind when you buy gold. Right now, 2021 1/4 oz British Gold Britannia Coins are available to purchase online from JM Bullion.

Each 2021 1/4 oz British Gold Britannia offered through this listing comes to you in Brilliant Uncirculated condition. The coins in this weight are available individually inside of protective plastic flips.

For the 2021 release of British Gold Britannias, the Royal Mint has unveiled a total of four new security features on the reverse field of the coins. The most noticeable and visually brilliant is found in the background. Lines have been added behind Britannia’s figure that mimics the rolling waves of the ocean as you adjust the angle of viewing while holding the coin. Similarly, as you adjust the angle of viewing you will notice the new security feature in the lower left that changes from a closed lock to the trident head.

The other two security features are less noticeable right off the bat. The Union Jack on Britannia’s shield now has a tight series of tincture lines and there is a small inscription in the ring between the Britannia design field and the inscriptions of the outer rim. Here, you will find a micro-inscription that reads “Decus Et Tutamen,” a Latin phrase that translates as “an ornament and a safeguard.”

On the obverse side 2021 1/4 oz British Gold Britannias is the fifth-generation effigy of Her Majesty, Queen Elizabeth II. Created in 2015 by Jody Clark, this effigy of the Queen captures her at the age of 89 as she wears the George IV State Diadem Crown. Mr. Clark, then 33 years old, is the youngest Royal Mint engraver ever to create a monarch’s portrait.

The reverse face of the 2021 British Gold Britannia includes the classic, powerful depiction of Britannia from Philip Nathan. In this design, she stands resolute along the coastline ready to defend the nation. She holds a trident in one hand, granting her control of the seas, while her other hand clutches an olive branch and rests upon a shield with the Union Jack flag.

If you have any questions, please feel free to ask. JM Bullion customer service is available at 800-276-6508, online through our live chat, and via our email address.

Tamara from - July 24, 2021
"The coin is as described within the description. Was very please with the coin. Will buy another coin soon."