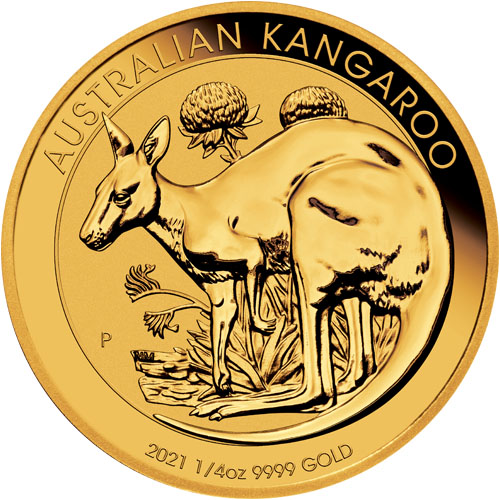 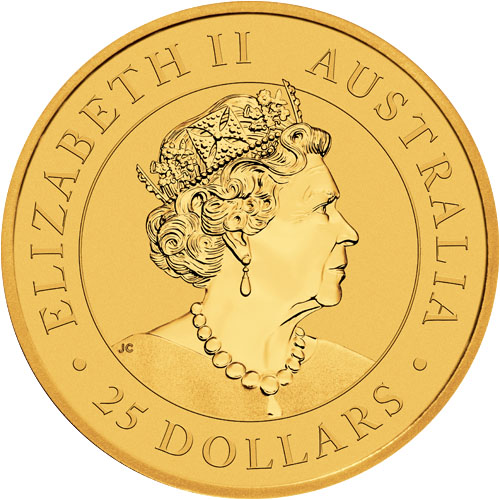 Each of the 2021 1/4 oz Australian Gold Kangaroo Coins available to you in this product listing comes in Brilliant Uncirculated condition. The fractional-ounce weights in the series are all available individually inside of acrylic capsules. The mintage cap set for the 2021 Australian Gold Kangaroo in this weight is just 150,000 coins. This is the same mintage that has been applied to several recent issues of the coin.

Although the Perth Mint has a relatively high mintage cap for this weight, recent releases of the coin have seen demand fall well short of reaching that maximum. The 2018 version in this weight had the same mintage cap and sold just 25,775 coins, while the 2019 release had the same cap as well, but sold only 11,220 gold coins.

Queen Elizabeth II is found on the obverse side of 2021 1/4 oz Australian Gold Kangaroo Coins. This is the sixth-generation effigy of Her Majesty to feature on Australian coins and is based on the fifth-generation British design created for the Royal Mint of England in 2015. The bust of the Queen captures the longest-reigning British monarch at the age of 89.

A red kangaroo is depicted in the reverse field of the 2021 1/4 oz Australian Gold Kangaroo Coin. This design shows the kangaroo crouched down near Waratah and Kangaroo Paw plants, both of which are native to the Australian continent. The red kangaroo is one of four subspecies of the large marsupial and is the largest and most common member of the species.

Founded in 1899, the Perth Mint is the oldest operating mint in Australia. Originally opened to serve as a Royal Mint branch facility alongside the Sydney Mint and Melbourne Mint, it is the only one still in operation and is older than even the new sovereign mint of Australia, the Royal Australian Mint.

If you have any questions when buying gold, JM Bullion is here to help. Please feel free to call us at 800-276-6508, chat with us live online, or email us directly.

Enrique from FL - December 15, 2020
"You can't go wrong with these coins. The kangaroo's shine is more pronounced and even the queen's side has more detail. I won't be selling these."