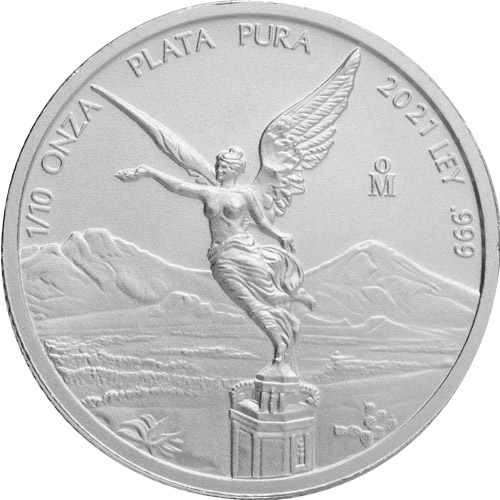 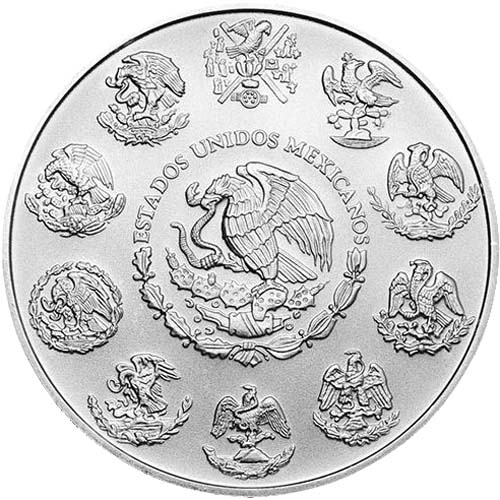 The detailed design on the reverse of the Mexican Silver Libertads has been in use in its current form since 1996 when it debuted on the coin to replace the previous design of Winged Victory. The original design of Victory used from 1982 to 1995 was from the 1921 Centenario, a 50 Peso gold coin released by the Mexican Mint to celebrate the centennial of the nation’s independence.

In this modern image of Victory, her figure is less dominant in the visual field, leaving more room for the mountains of Popocatepetl and Iztaccihuatl in the background field. This design captures Winged Victory’s figure in a three-quarter side profile image, but is still inspired by and based on the statue of Winged Victory that sits atop the Mexican Independence Victory Column.

Obverse imagery on the 2021 1/10 oz Mexican Silver Libertad includes only the modern Mexican coat of arms. This emblem serves as the official seal of the federal government of Mexico and depicts a golden eagle in left-profile relief with a serpent clutched in its talons and beak. A wreath of oak and laurel is below the seal, with the nation of issue inscribed in Spanish above the seal.

Reverse designs of the 2021 Mexican Silver Libertad include Winged Victory with the landscape outside Mexico City prominent in the background. These two volcanic peaks are named Popocatepetl and Iztaccihuatl. The peak of Iztaccihuatl, featured on the left of the design’s background field, translates as “White Woman” as the snow-capped peak resembles the body of a woman lying down.

These 2021 1/10 oz Mexican Silver Libertad Coins are available to you with protective plastic flips. All of the silver coins you receive are in Brilliant Uncirculated condition.