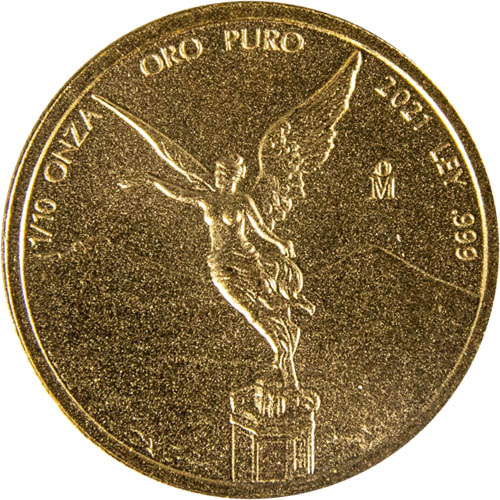 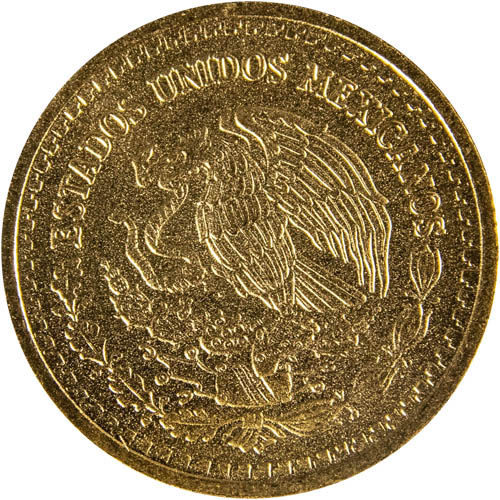 The smallest weights available in the Mexican Gold Libertad range are the 1/20 oz and 1/10 oz gold coins. Common weights available in many series, including the American Eagle, Canadian Maple Leaf, and British Britannia, 1/10 oz gold is a favorite of investors when looking to diversify holdings or purchase more gold when prices move higher. Right now, 2021 1/10 oz Mexican Gold Libertad Coins are available to purchase online from JM Bullion.

Each of the 2021 1/10 oz Mexican Gold Libertad Coins available to you for purchase in this product listing comes with a protective plastic flip. Whether you purchase one or multiple 1/10 oz gold coins, each one will come inside of an individual flip. All coins are available to you in Brilliant Uncirculated condition from the mint.

Obverse designs of the 2021 Mexican Gold Libertad Coin include the image of the national coat of arms. The national seal is based on an ancient Aztec symbol found on the Codex Mendoza, an artistic document recorded in 1541 to chart the history of the rulers of the Aztec Empire and the founding of its capital city, Tenochtitlan.

Reverse visuals present on the 2021 1/10 oz Mexican Gold Libertad Coin focus on Winged Victory. Based on the goddess Victoria from Roman mythology, Victory became a symbol of Mexican resistance during its revolutionary fight against Spain for freedom from colonial control. Winged Victory is depicted here as the statue that stands atop the Mexican Independence Victory Column in Mexico City. The mountain peaks of Popocatepetl and Iztaccihuatl, both active volcanoes, feature in the distant background field of the design element.

If you have any questions, JM Bullion customer service is here to help. You can call us on the phone at 800-276-6508, chat with us live online, or email us directly.