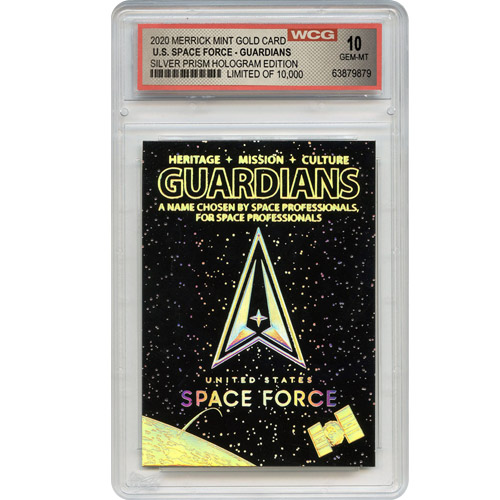 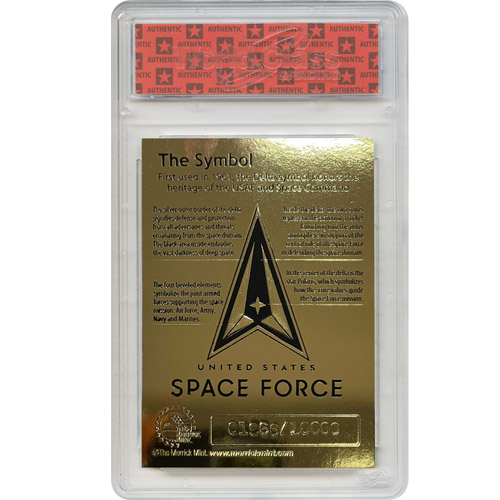 The founding of the United States Space Force in 2019 added a sixth branch to the United States Military, joining the US Army, US Navy, US Marine Corps, and the US Air Force. Prior to the addition of the Space Force, it had been 62 years since the US Military added a new active branch to its roster. Now, 2020 Space Force Hologram Gold Cards are available to you for purchase online from JM Bullion.

With the advent of flight just before World War I and its massive development in World War II, the US would eventually form an independent United States Air Force, a branch formalized in 1947. For the next 60 years, no further additions were made to the United States Military. In 2019, President Donald J. Trump signed a Defense Authorization Act that included funding for the formation of the United States Space Force.

On the obverse of these new 2020 Space Force Hologram Gold Cards is a depiction of the realm of operation for the Space Force. In the visual field, you will find a gold foil layer on Earth, a rocket leaving its atmosphere, and a satellite orbiting the planet. The Space Force name and logo at the center have a distinctive hologram effect for impressive contrast.

The reverse of 2020 Space Force Hologram Gold Cards comes with a thin layer of 23-karat gold across the entire design field. The Space Force logo again features on this side, this time with the history of the symbol in the background field.

These 2020 Space Force Hologram Gold Cards are GEM Mint 10 cards with sharp corners and detailed designs. This grade on a card indicates a near-perfect item. The cards are housed in plastic slabs and come with a unique serial number on the reverse of the card.

JM Bullion customer service can assist you at 800-276-6508 with questions about gold for sale. Alternatively, you can reach us online through our live chat and email address features.