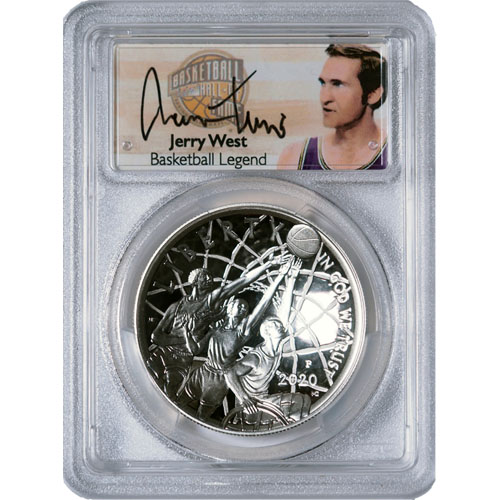 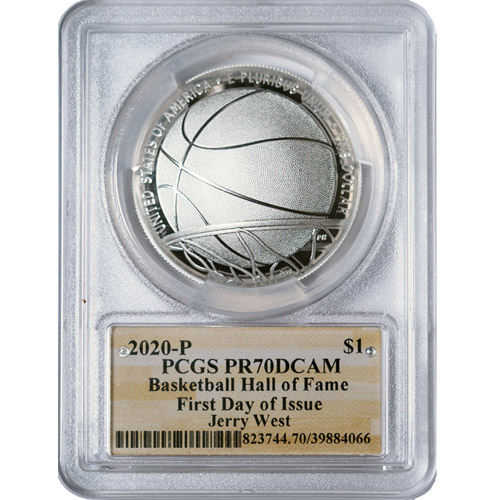 In honor of the 60th anniversary of the Naismith Memorial Basketball Hall of Fame, the United States Mint issued a series of domed, proof silver coins in 2020. Among these coins was $1 proof silver coin minted by the Philadelphia Mint. Right now, 2020-P $1 Basketball HOF Silver Coins in perfect condition are available to purchase online from JM Bullion.

Each 2020-P $1 Basketball HOF Silver Coin available here comes with a perfect certification from the PCGS. Coins in PR70 condition exhibit full, original mint luster and have no detracting flaws present. The DCAM designation stands for deep-cameo and refers to the presence of strong, frosted designs over deeply-mirrored, clear fields. First Day of Issue coins are those received for grading within 24 hours of release from the mint.

Inside the slab from the PCGS, these coins come with a special Jerry West label. Jerry West was a first-round draft pick of the Minneapolis Lakers in 1960 and played in the NBA for 14 seasons as a point guard. Though he has a long list of accolades to his name as a player, coach, and executive in the NBA, the most impressive might be the fact that his silhouette is the figure found in the NBA logo.

Several players are depicted on the sunken obverse field of the 2020-P Basketball HOF Silver Coin. These players are jostling for position beneath the ball as each individual attempts to rebound it coming off the rim. The background design includes the image of the net from a basketball hoop.

If you have any questions about buying silver, please feel free to ask. JM Bullion customer service is available at 800-276-6508, online using our live chat, and via our email address.