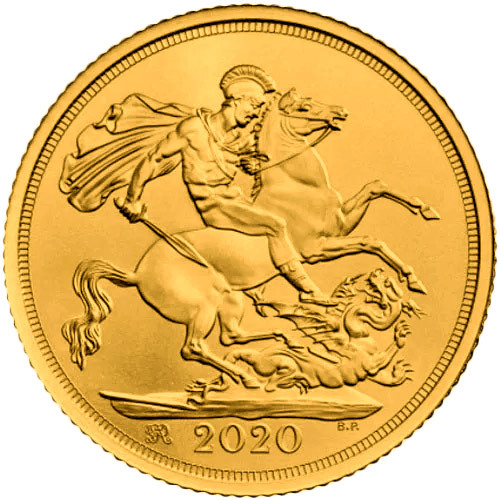 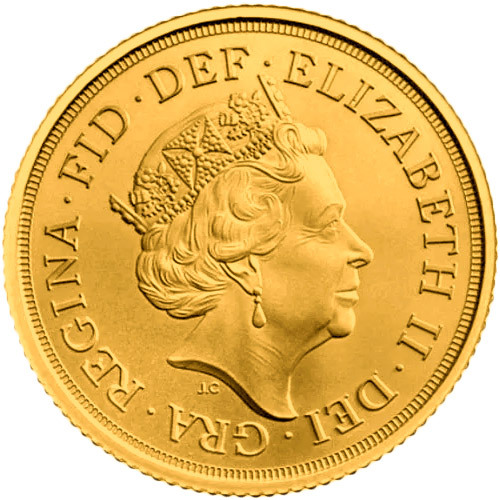 The modern Gold Sovereign is based on the historic English gold sovereign first issued by King Henry VII in 1489. The English sovereign went through countless variations of monarch effigies on the obverse and distinctive reverse designs through 1603 and the reign of King James I of England. The Great Recoinage Act of 1816 resulted in the reintroduction of the Gold Sovereign.

The obverse face of the 2020 Great Britain Gold Sovereign has a bust of Queen Elizabeth II. Known as the fifth-generation effigy of Queen Elizabeth II, this portrait of the Queen was created in July 2015 by Jody Clark for the Royal Mint of England. It depicts the Queen in right-profile relief with the George IV State Diadem Crown on her head.

Great Britain Gold Sovereigns have a nominal value of 1 Pound sterling assigned by the Royal Mint, though the coins are not marked with a face value and not intended for use in circulation. Each coin has 22-karat gold content, also known as the Crown gold alloy. The coins have 91.67% gold by weight with copper making up most of the remaining metal content in the alloy.

If you have any questions, please contact JM Bullion. Our customer service team is available on the phone at 800-276-6508, on the web through our live chat, and via our email address.