While the world’s bullion coin market includes a wide array of silver and gold coins, platinum coins are much fewer and far between. Only a handful of nations actually issue platinum coins on a regular basis, and among them, many have been introduced in recent years. One of the older platinum coins still available in the modern era is the American Platinum Eagle. With steady obverse and reverse designs and low mintages, this is a coveted bullion release each year. 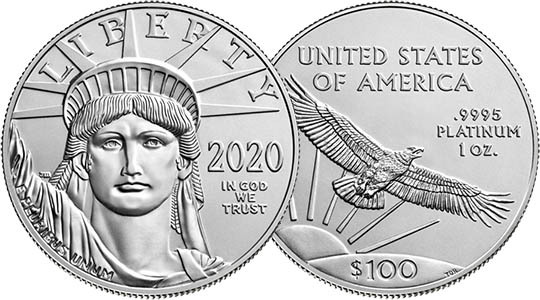 Pre-Sale for the 18th Release is on Now!

Platinum Eagle coins have been available from the United States Mint since 1997, but the production of the bullion version of the coin has not been steady in all of the years since that time. 2020 marks the 18th year of release for the American Platinum Eagle bullion coin because it was not issued between 2009 and 2013. It was struck in 2014, but in 2015 was suspended again for one year, before it returned in 2016 once again. It has been produced steadily each year since 2016, but the mintage figures for the coin have been much lower than in the years prior to the 2009 suspension.

Since 1997, the United States Mint has used John Mercanti’s design of the Statue of Liberty on the obverse of the 2020 1 oz American Platinum Eagle coin. This image is known as “Liberty looking to the Future,” and it focuses on the face of the Statue of Liberty. Her stoic glare remains steady with her crown resting firmly on her head and her right hand raising up out of view in the design field holding her torch. Inscriptions on the coin include the word “Liberty” along the top rocker of the design field, the date mark “2020,” and the national motto “In God We Trust.” You will also notice Mercanti’s initials “JM” near the braids to the left of Liberty’s head (her right) and the phrase “E Pluribus Unum” within her robes in the lower-left field.

This popular design has been used on the obverse of the bullion American Platinum Eagle since 1997. From 1997 to 2017, it was also featured on the obverse side of the proof coins, though it has been replaced with modern depictions of Liberty.

Like its counterpart on the obverse field, the reverse design of the 2020 American Platinum Eagle has remained steady since the program’s release in 1997. Created by Thomas D. Rogers, this image is referred to as “Soaring Eagle over America.” In the design field, an American bald eagle soars over the continent as the sun rises in the background. The design includes the inscriptions of “United States of America,” “.9995 Platinum 1 oz,” and “100.” This image is distinctive in that it is the only one to have ever repeated on the proof versions of the coin.

The US Mint famously changes the reverse design elements on its Proof Platinum Eagle each year. The only design ever repeated is Rogers’ “Soaring Eagle over America. It featured first on the 1997 proof version of the coin and again in 2017 as the US Mint marked the 20th anniversary of the coin with the return of the Rogers design.

Historical Mintage Figures in this Series

The bullion American Platinum Eagle coins have never reached the highs of the first three years of availability in the late 1990s. The highest recorded mintage for the 1 oz platinum coin came in 1998 when 133,002 coins were sold. Either side of that year, in 1997 and 1999, the mint sold 56,000 American Platinum Eagles. Since returning in 2014, mintage figures have hovered at or below the 20,000-mintage mark.

Now is the time to increase your holdings in platinum or starting diversifying by purchasing the 2020 American Platinum Eagle. Platinum prices have been depressed for years, but have also shown signs of strength as a new decade dawns. If you have questions, please contact JM Bullion at 800-276-6508, chat with us live online, or email us directly. Don’t forget to check back with our blog each week and follow us on Facebook for daily updates and spot price contests.