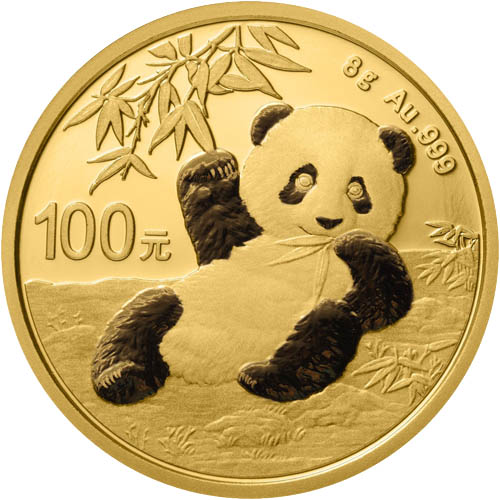 Each 2020 8 Gram Chinese Gold Panda Coin available to you through this product listing is unsealed and features a protective flip. All coins are in Brilliant Uncirculated condition.

8 Gram Chinese Gold Panda coins were introduced in 1982 at the same time as three other options. Originally offered as the 1/4 oz Gold Panda, since 2016 this coin has been produced in Gram weights instead. The transition from Troy ounces to Grams resulted in this coin actually gaining some weight from 7.7758 Grams to an even 8 Grams. The diameter of the coin increased as well from 21.95 mm to 22 mm.

The obverse side of the 2020 8 Gram Chinese Gold Panda Coin bears the same image each year. On this face of the coin, the Hall of Prayer for Abundant Harvests is available as part of the Temple of Heaven complex. The complex was built in south-central Beijing between 1406 and 1402 for Taoist religious followers.

On the reverse field of the 2020 Chinese Gold Panda Coin, you will find a design from Song Lina. A native of northeastern China, her playful design depicts a young Giant Panda cub lying on its back as it uses its paws to collect some bamboo leaves to dine on.

All 2020 8 Gram Chinese Gold Panda Coins are available from the Chinese Mint on an annual basis. The coins do not come with mint marks, so it is not possible to determine which mint in the system produced the coins. However, the Chinese Mint is known to produce its bullion Chinese Panda coins at the Beijing, Shenyang, Shenzhen, and Shanghai mint locations.

If you have questions about these gold coins for sale, JM Bullion would be happy to help. We are available on the phone at 800-276-6508, online using our live chat, and via our email address.