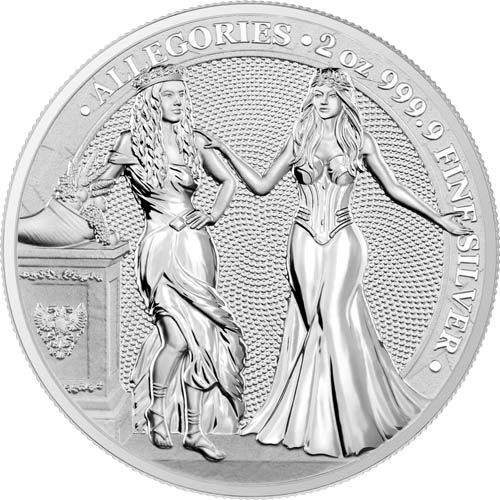 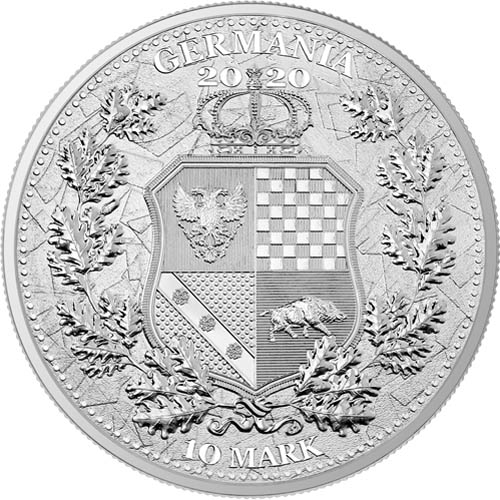 The figure now known as Italia turrita is the female personification of Italy, but her representation is the result of a deity from the Anatolian region of modern-day Turkey. That figure was Cybele, a deity of fertility. During the 3rd century BC, she was adopted by the Roman Empire as it faced possible defeat at the hands of Hannibal and the Carthaginians.

Roman priests predicted the city would only be saved by the image of Cybele. After her likeness was erected in the city’s Temple of Victory, the Roman Army defeated Hannibal and saved the city. She became known as the Roman deity Magna Mater, or Great Mother. After the Social War in the 1st century BC, she eventually came to represent a peaceful and united Italy under the rule of the Roman Empire.

Italia and Germania are shown together here on the obverse of 2020 2 oz Germania The Allegories Italia & Germania Silver Round. Italia is featured on the left with her right hand resting on a pedestal next to the Horn of Plenty. Germania stands next to her with a hand on Italia’s shoulder as a gesture of friendship.

Germania Mint’s coat of arms is found on the reverse field of 2020 Germania The Allegories Italia & Germania Silver Rounds. The coat of arms boasts a crowned shield that is quartered and flanked by an oak leaf wreath.

These 2020 2 oz Germania The Allegories Italia & Germania Silver Rounds are available to you for purchase in brand-new condition. Each one of the silver rounds comes with its own protective acrylic capsule, a Certificate of Authenticity from the Germania Mint, and a box.

JM Bullion customer service is available to assist you with questions at 800-276-6508. We are also available to you online through our live chat and email address features.