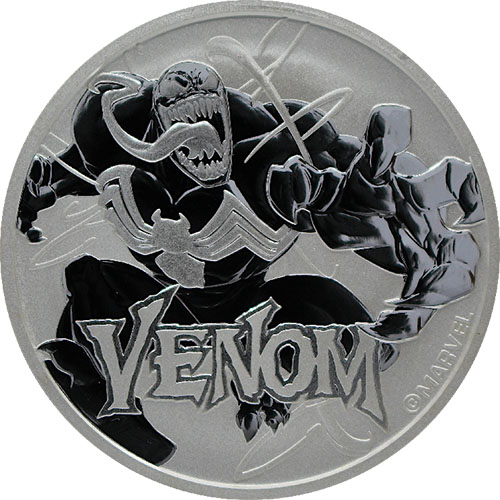 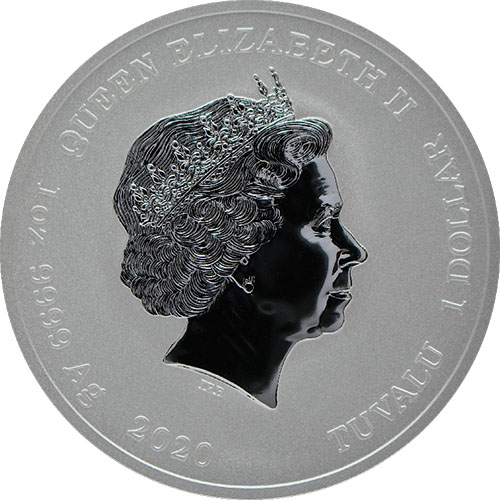 The popularity of the Perth Mint’s Marvel Series has sustained the program beyond the planned six designs to include fresh designs in late 2019 and 2020. The eighth design to come to the series is the first to double-up on one of the Marvel Comic franchises. Today, 2020 1 oz Tuvalu Venom Marvel Series Silver Coins are available to you online from JM Bullion.

The Marvel Series of silver bullion coins from the Perth Mint launched with a 2017 date-marked coin featuring the image of Spiderman, the only teen superhero in the comic franchise. That design remains, to this point, the only design that has sold out entirely. Subsequent releases include, in order, Thor, Black Panther, Iron Man, Deadpool, Captain America, and Hulk.

All 2020 1 oz Tuvalu Venom Marvel Series Silver Coins in this product listing are available to you in Brilliant Uncirculated condition. The coins in this series are packaged individually with a protective plastic capsule or housed in sealed rolls of 20 coins. You can also purchase the coins in bulk with boxes of 100 coins or 300 coins. These boxes contain five rolls in the 100-box option and 15 rolls in the 300-box option.

On the obverse side of the 2020 Tuvalu Venom Marvel Series Silver Coin is a depiction of Queen Elizabeth II. This is the fifth-generation portrait on Australian and Commonwealth coins produced by the Perth Mint. Its use continues the design element on the obverse of all Marvel Series silver coins to maintain consistency in the obverse design. Her Majesty is featured in right-profile relief wearing the Girls of Great Britain and Ireland Tiara.

The reverse face of 2020 1 oz Tuvalu Venom Marvel Series Silver Coins comes with a depiction of Venom from the Marvel Comics franchise. Venom made its first appearance in The Amazing Spider-Man #252 published in May 1984. Venom is not an individual human superhero, but rather an amorphous figure that survives by bonding with a host. It is most often associated with the Spiderman franchise.

Marvel Series silver coins are produced by the Perth Mint in limited numbers. Founded in 1899, the Perth Mint is Australia’s oldest operating mint and is independent of the Royal Australian Mint.

Please feel free to contact JM Bullion if you have questions when buying silver. You can call us on the phone at 800-276-6508, chat with us live online, or email us directly.

Lea from - February 03, 2020
"Beautiful coin.. If one wanted to, they could flip this on ebay right now for a 20 dollar profit, without buy-nows and just auctions.. "