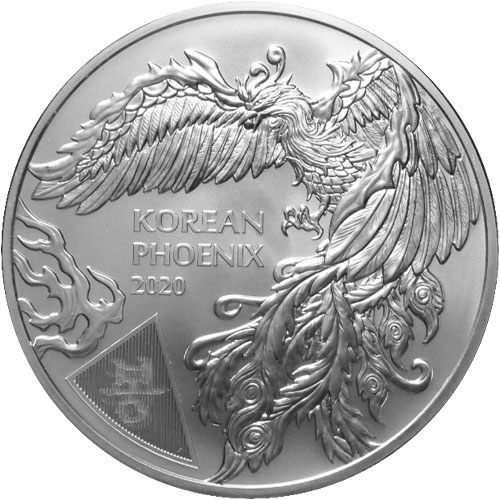 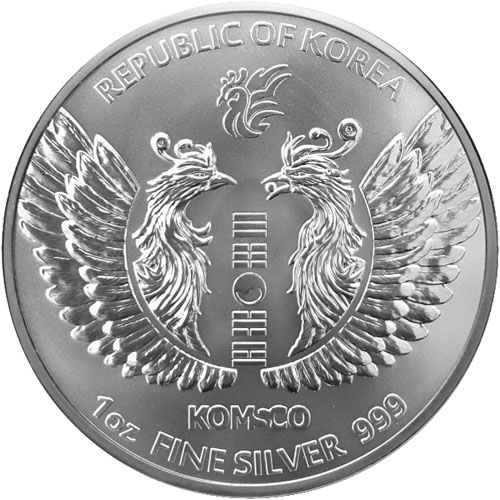 The phoenix is a mythical bird from Ancient Greek folklore that is believed to have the power to cyclically regenerate over the course of time. The bird ages from a hatchling to old age and famously bursts into flame before regenerating again as a younger bird. Known as the Bong Hwang in Korea, the phoenix has a deep history in Korean culture and is part of national symbolism for the modern Republic of Korea. Right now, 2020 1 oz South Korean Silver Phoenix Medals are available to purchase online from JM Bullion.

Each of the 2020 1 oz South Korean Silver Phoenix Medals in this product listing comes with an individual protective plastic flip. Multiples are housed in tubes of 25 medals or boxes of 250 medals that include a total of 10 tubes. All coins in this listing are in Brilliant Uncirculated condition and represent the first release of the Silver Phoenix.

The use of the phoenix in Korean culture dates back to the 14th century and has long been used in other Asian cultures as a symbol of the emperor reigning as a monarch. The phoenix is considered a noble creature. Since 1967, the government of the Republic of Korea has used the phoenix in a motif represent the office of the President of South Korea.

The obverse side of 2020 1 oz South Korean Silver Phoenix Medals includes an artistic depiction of the phoenix in its full glory. The bird is in flight in the air with its talons reaching down, its long tail feathers flowing down underneath its frame and its wings spread out wide. The date of issue and name of the new series is featured on this side.

Also visible on this side of the coin is a new security image that KOMSCO has produced in a different manner. Rather than creating the security feature on the medal after striking using resins or other visual effects, this rigid, lined feature is struck into the coin. As you adjust the angle of viewing, the Korean language terms for Bong and Hwang appear.

On the reverse face of the 2020 South Korean Silver Phoenix, you will find a motif based on the presidential seal for South Korea. The image features two phoenixes facing in toward one another with the Taeguk in the center. The nation of issue, weight, metal content, and purity are all on this side.

If you have any questions about buying silver in this listing, please contact JM Bullion. Our team members are available at 800-276-6508, online using our live chat, and via our email address.

Neal from - April 12, 2021
"I've had my eye on this one since it was released, and finally pulled the trigger. What an amazingly intricate coin! Absolutely beautiful. And I thought the Chiwoos were sweet...KOMSCO has it going on with their stuff!"