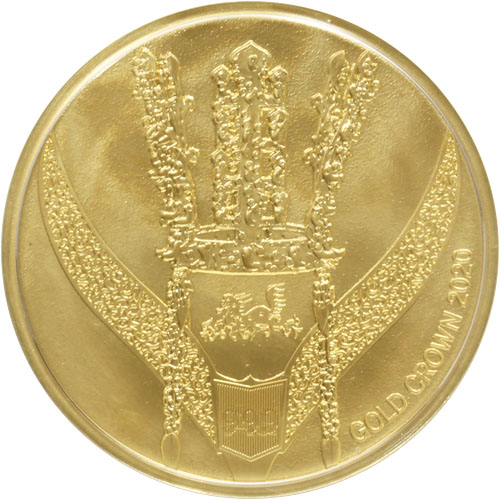 The new South Korean Gold Crown is a unique specimen from KOMSCO that reaches back more than 1,000 years into Korean history for a design based on the crowns and beliefs of the Korean kingdom of Silla. The focal point of the designs on the coin include crowns held in the National Treasure of the Republic of Korea. Right now, 2020 1 oz South Korean Gold Crown Medals are available to purchase online from JM Bullion.

Each of the 2020 1 oz South Korean Gold Crown Medals available in this listing comes in Brilliant Uncirculated condition. The gold medals are all packaged individually with protective plastic capsules.

The new South Korean Gold Crown is a beautiful gold bullion specimen with images plucked from Ancient Korea. Unlike other gold bullion from KOMSCO, these medals do not have the nominal clay face value, but instead are only issued with markings of the weight, metal content, purity, and nation of issue.

The obverse of 2020 1 oz South Korean Gold Crown medals features the image of the Cheonmachong gold crown. Known as the Cheon-ma chong crown, this gold crown is one of the many gold crowns of Silla. Each of the crowns from the Silla kingdom date between the 5th and 7th centuries and were excavated around the city of Gyeongju, the former Silla capital city, and are now held as national treasures of South Korea.

National Treasure 188, the Cheon-ma chong gold crown was discovered in 1973 in the Heavenly Horse Tomb. It is believed to have been the crown of either King Soji or King Jijeung. The actual crown stands 32.5 centimeters in height and has three prongs that form the Chinese character for mountain when viewed from the front.

On the reverse side of 2020 South Korean Gold Crown medals, you will find the swirling image of a mythical animals tail. The tail is said to be that of Sam-jok-o, believed in Korean mythology to be the sun god that lives in the sun. The design is said to resemble that of a three-legged crow and is known as the golden crow.

If you have any questions about this new gold for sale, please feel free to reach out to JM Bullion. Our customer service team is available to assist you with questions at 800-276-6508, online using our live chat service, and via our email address.