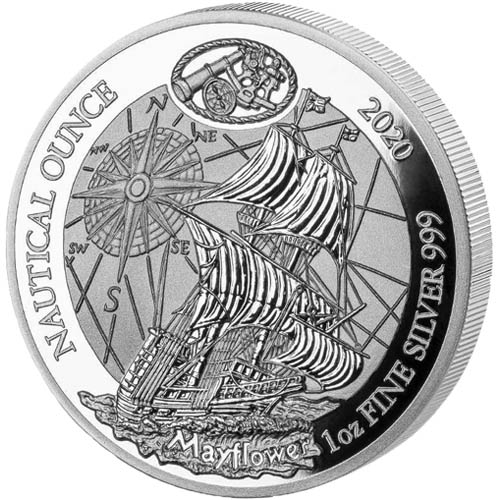 The Mayflower is one of the most well-known sailing vessels in American history. The ship itself predates the founding of the United States of America, but its place in the history of the country is held dearly as the start of permanent settling in what is now the United States. The Mayflower departed from Plymouth, England, in September 1620 with a goal of reaching the New World. Now, 2020 1 oz Proof Rwandan Silver Mayflower Nautical Ounce Coins are available to you for purchase online from JM Bullion.

English Puritans were the main passenger population on the Mayflower as it sailed from England to the New World. Puritans were Protestant members of the Church of England who believed the church had failed to complete its reformation launched during the reign of King Henry VIII. Among the many beliefs of the Puritans, a core issue with the church was the incomplete rooting out of Catholics and Catholicism in the Church of England.

Starting in July 1620, the Mayflower departed from London down the River Thames to the English Channel. It first anchored at Southampton and rendezvoused with the Speedwell, a ship coming from Holland with the majority of the English Puritans. The ships initially left for America on July 5th, but the Speedwell sprung a leak and the ships stopped in Dartmouth. After the Speedwell sprung another leak after the ships departed on August 5th, the Mayflower continued on to America alone with 103 passengers and 30 crew.

On the obverse of the 2020 1 oz Proof Rwandan Silver Mayflower Nautical Ounce Coin is a depiction of the Mayflower. Once the Mayflower departed on its own from Plymouth, England, it took just over two months to cross the Atlantic Ocean. The ship arrived off the coast of Cape Cod on November 9, 1620, and the settlers would eventually build up a colony before winter set-in in full.

The reverse side of 2020 Proof Rwandan Silver Mayflower Nautical Ounce Coins includes the coat of arms for the Republic of Rwanda. The national emblem features a traditional basket in the center with sorghum and coffee on either side, with all these elements flanked by traditional indigenous shields.

These 2020 1 oz Proof Rwandan Silver Mayflower Nautical Ounce Coins are available to you with individual capsules and come with a Certificate of Authenticity. Proof coins such as these have frosted designs and mirrored fields.

JM Bullion customer service is available to answer questions on the phone at 888-989-7223 when you are buying silver. We are also available on the web using our live chat and email address.