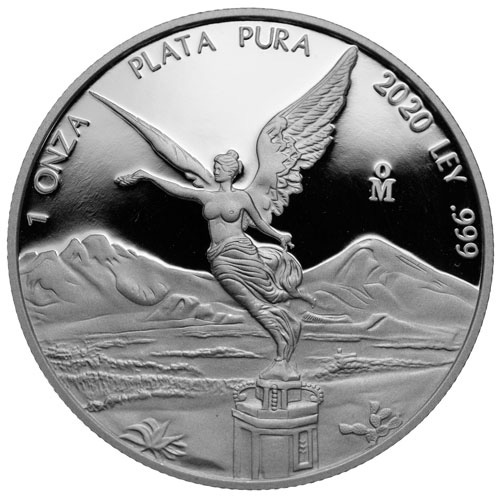 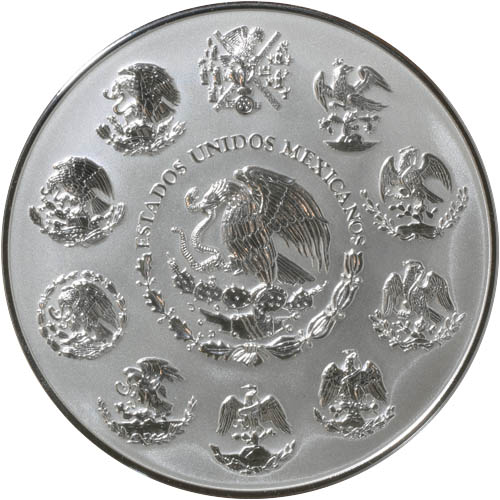 The longest-running proof silver coin for sale in the Proof Mexican Libertad Series is the 1 oz silver coin. Offered initially in 1983, the coin has been available annually since 1986 without missing a single year of issue. In fact, when the other six weights were suspended in 2012, the 1 oz silver con carried on as the only option for collectors. Now, 2020 1 oz Proof Mexican Silver Libertad Coins are available to you for purchase online from JM Bullion.

Winged Victory appears on the obverse of all 2020 Proof Mexican Silver Libertad Coins. Her figure is depicted in a front-facing relief with a wreath crown in one hand and a broken chain in the other. In the distant background field, you can see the twin volcanic peaks of Popocatepetl and Iztaccihuatl.

The Mexican Coat of Arms is featured not once, but 11 times on the reverse of 2020 1 oz Proof Mexican Silver Libertad Coins. The modern symbol of the government is featured in the center of the design field and surrounded on the outer edge by 10 historic versions of that same seal.

We encourage JM Bullion customers to call 800-276-6508 with any questions. You can connect with us on the web as an alternative using our live chat and email address features.