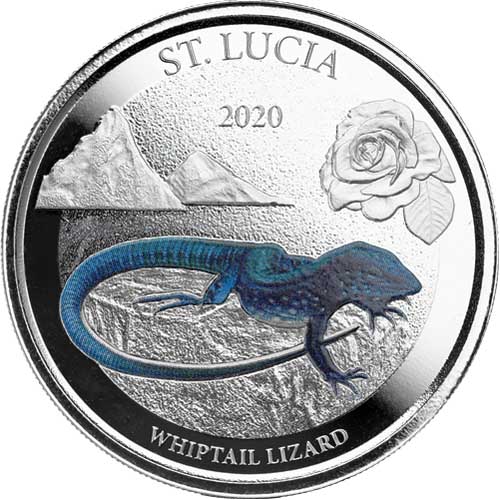 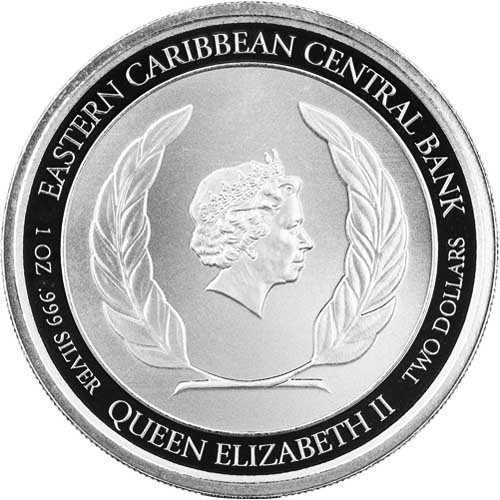 The Eastern Caribbean Central Bank was formed to provide the nations of this subregion within the Caribbean Sea with a stable monetary authority. The nations that joined the ECCB abandoned previous fiat currencies in use, many of which were regulated out of the region by other major world powers and former colonial rulers.

When the ECCB was formed, the initial members were those nations that had formed the OECS, with St. Lucia being among those nations. In fact, only one nation that was not a founder of the OECS has adopted the Eastern Caribbean dollar and the oversight of the ECCB: Anguilla.

Obverse designs on the 2020 1 oz Proof Colorized St. Lucia Whiptail Lizard Silver Coins feature the effigy of Queen Elizabeth II. Created by Ian Rank-Broadley, this effigy of the Queen is a right-profile relief that shows Her Majesty wearing the Girls of Great Britain and Ireland Tiara. This tiara is said to be the Queens favorite and comes to her through her grandmother, Queen Mary.

Reverse depictions on the 2020 Proof Colorized St. Lucia Whiptail Lizard Silver Coins include the famed Pitons off St. Lucias west coast and the namesake lizard in the foreground. The whiptail lizard, known as Zandos by the local populace, is native only to St. Lucia within the Caribbean, with other members of the species found in Central and South America. This side of the coin boasts the only colorization present, with the whiptail lizard captured in a brilliant shade of blue.

These 2020 1 oz Proof Colorized St. Lucia Whiptail Lizard Silver Coins are available to you inside protective capsules and black presentation boxes. Each coin comes with a Certificate of Authenticity and boasts proof visuals that include matte designs and mirrored fields.

JM Bullion customer service is available to you on the phone at 800-276-6508. Alternatively, you can chat with us live online or email us directly.