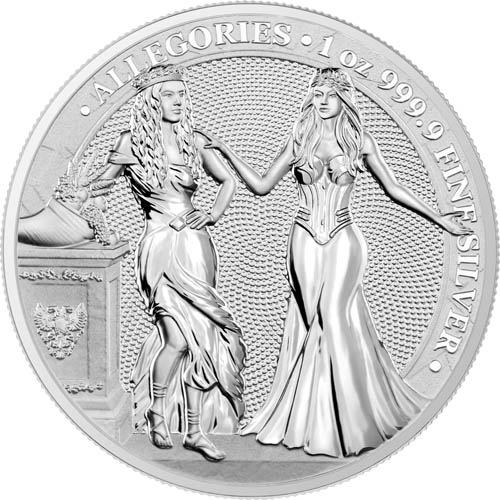 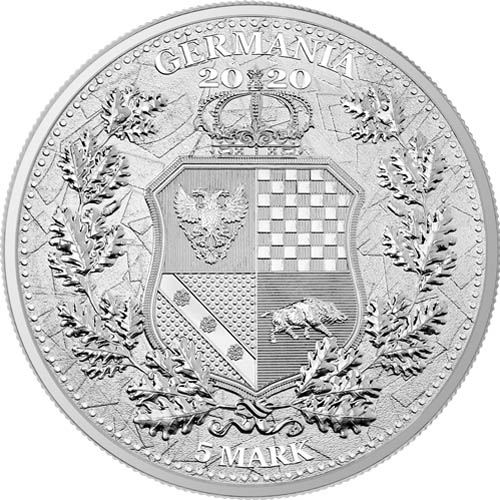 Each 2020 1 oz Germania The Allegories Italia & Germania Silver Round in this product listing comes in brand-new condition from the Germania Mint. The rounds are individually housed inside of protective acrylic capsules.

The term allegory is known as a literary device used in cultural literature as a symbol of an event, a place, or even an entire culture. Female personifications are common as representatives of nations. Germania has historically represented the German people dating back to the rise of the German Empire during the 19th century. Britannia, the first to feature in this series, has represented Britain for more than 2,000 years. Columbia, second in the collection, has represented the United States of America since its founding in 1774. Now, Italia features as the personification of Italy.

The obverse side of 2020 1 oz Germania The Allegories Italia & Germania Silver Round features the two female personifications. Italia stands on the left of the design field with a pleated dress and a turreted, or walled, the crown on her head. Germania stands to the right of the design field with her right hand on Italia’s shoulder as a symbol of friendship and her left hand welcoming Italia to join her.

Italia is known as Italia turrita, a nod to the 2,000-year-old concept of Cybele. The figure of Cybele originated in the Anatolian regions of the Roman Empire more than 2,000 years ago. During the Second Punic War in the 3rd century BC, Roman priests predicted that the only thing that could save the city was the deity Cybele. After her figure was placed in the Temple of Victory in Rome, the Roman Army went on to defeat the armies of Hannibal and save Rome.

On the reverse face of 2020 Germania The Allegories Italia & Germania Silver Rounds is a depiction of the Germania Mint seal. The coat of arms for the mint includes a crowned shield that is quartered and flanked by a wreath of oak leaves.