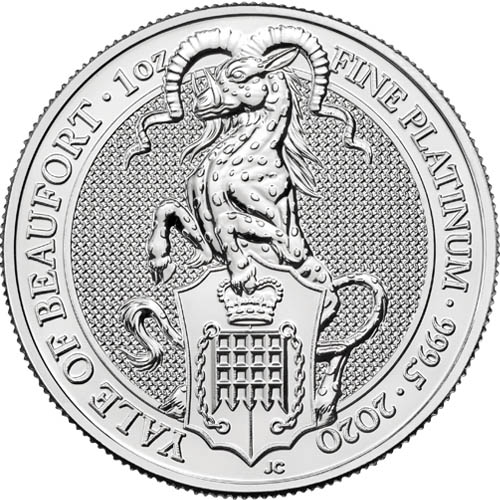 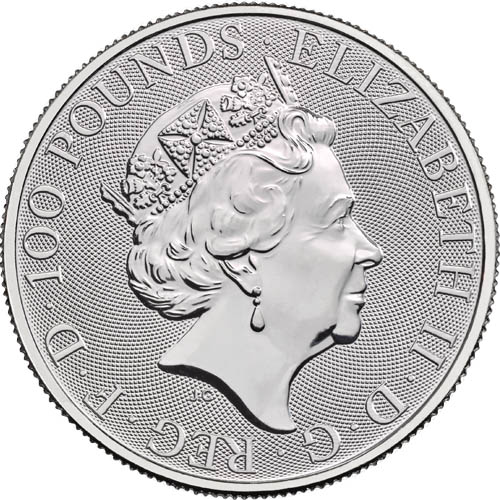 The popular images issued in the Queens Beast Series from the Royal Mint launched as only gold and silver bullion options. However, as of 2017 the series also features platinum coins for investors to choose from when buying metals. Although the series was well underway at this point, the Royal Mint went back and started at the first release of the Lion of England when debuting the platinum coins. Now, 2020 1 oz British Platinum Queens Beast Yale Coins are available to you for purchase online from JM Bullion.

A Yale is a cross between an antelope and goat in most cultural depictions. Popular in the heraldry of many European nations during the Middle Ages and Renaissance, the Yale is often depicted with the body of a goat, twisted horns on its head, and the tusks of a boar in its mouth.

Queen Elizabeth II features on the obverse of all 2020 1 oz British Platinum Queens Beast Yale Coins. In this design, Elizabeth II is shown in right-profile relief in the fifth-generation portrait that was created by Jody Clark in 2015. She wears the George IV State Diadem Crown, a crown that has a stunning 1,333 diamonds in its design weighing more than 300 karats in total.

The Yale of Beaufort is depicted on the reverse side of 2020 British Platinum Queens Beast Yale Coins. This image comes from the personal arms of Lady Margaret Beaufort. The design includes the Yale standing behind the shield that bears the personal seal of Henry VII which includes a crown above the portcullis design.

These 2020 1 oz British Platinum Queens Beast Yale coins are available to you in Brilliant Uncirculated condition. Coins in this listing will ship individually inside of protective plastic flips or in mint tubes for multiples of 10. Multiples of 100 coins will ship in a box that includes a total of 10 individual tubes.

JM Bullion customer service is available to field your questions at 800-276-6508. You can also chat with us live online or email us directly with any questions.