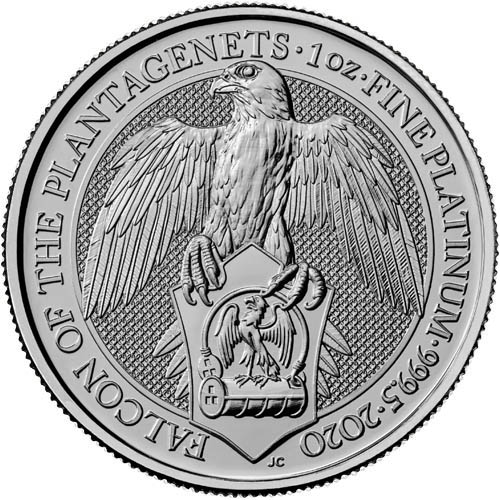 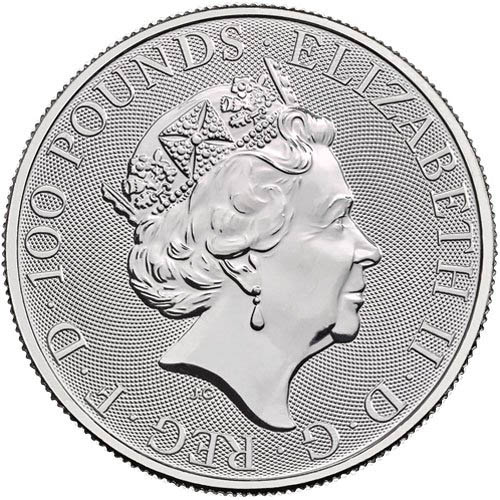 As low as $218.09 per coin over spot!
Add to WishlistLog In to add this product to your Wishlist
Free Shipping on $199+ Orders

The Queen’s Beast Series from the Royal Mint of England offers a lot of options to investors and collectors. Those individuals shopping the Queen’s Beast Series will find 10 designs, bullion and proof coins, and metallic options that include gold, silver, and platinum. The 2020 1 oz British Platinum Queen’s Beast Falcon of the Plantagenets Coin is currently available to you for purchase online from JM Bullion.

The Queen’s Beast Series focuses on the 10 heraldic beasts present in the form of sculptures carved for the coronation ceremony of Queen Elizabeth II. Each of the 10 beasts represented some of the most important in the history of the royal arms of England, from the combination of the crowns of England and Scotland to the House of Plantagenets, one of the longest-reigning houses in English history.

On the reverse of 2020 1 oz British Platinum Queen’s Beast Falcon Coins, you’ll find the design of the white falcon of King Edward III. A fan of hawking, Edward III chose the white falcon as his personal symbol. It is depicted on a shield clutching an open fetterlock, the latter symbol serving as a sign of his rightful claim to the throne.

The Plantagenet house originated in Anjou, France. The royal house’s claim to the English throne arose from the wedding of Geoffrey, Count of Anjou, to Matilda, the daughter of English King Henry I. The Plantagenets would come to power in England when King Henry II ascended to the throne in 1154. Henry II was the eldest son of Matilda and Geoffrey.

The obverse of 2020 British Platinum Queen’s Beast Falcon Coins includes the fifth-generation effigy of Queen Elizabeth II. England’s longest-reigning monarch, Her Majesty is depicted in right-profile relief in this design wearing the Royal Diadem crown on her head.

Individual coins arrive in protective packaging while multiples ship in tubes of 10 or Monster Boxes of 100 coins containing 10 tubes in total.