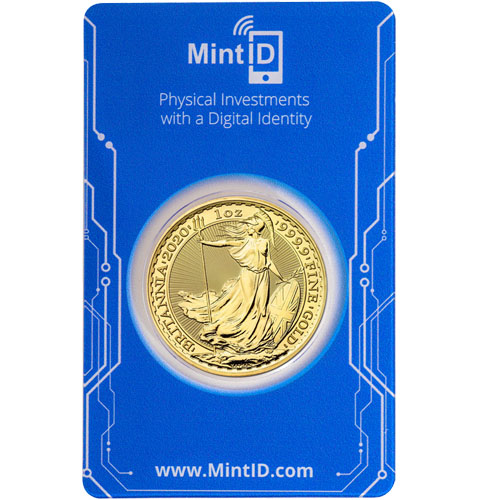 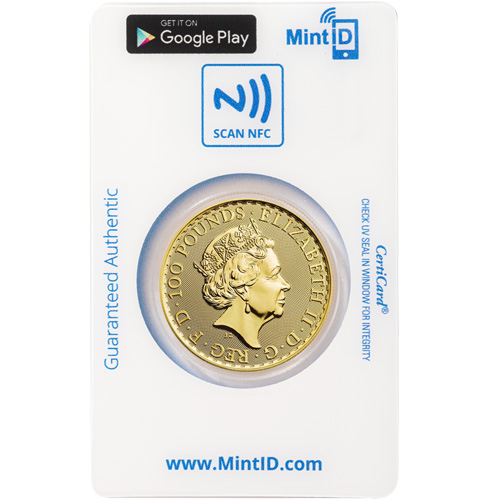 MintID certificate cards include an encrypted NFC microchip. The microchip is encrypted with AES-128 bit protocols and is tamper-evident, meaning it will “die” if attempts to tamper with the card and chip are made. This results in a “tampered” or “invalid” reading when the card is scanned by your smartphone using the MintID app. Your smartphone must be running iOS 13.0 or later or Android 4.2 or later.

The MintID app can be downloaded to any iOS or Android device. To authenticate your 2020 1 oz British Gold Britannia Coin, simply launch the MintID app on your device and enable NFC in your device settings. All you have to do is navigate to the scan section of the app and tap the certificate card to the reverse of your smartphone. The app will then pull up the individual profile of the coin inside of that card.

On the obverse side of the 2020 1 oz British Gold Britannia Coin is a portrait of Queen Elizabeth II. This bust of Her Majesty was created in 2015 by Jody Clark for the Royal Mint as its fifth-generation portrait of the Queen. It shows the Queen in right-profile relief wearing the George IV State Diadem Crown. The Queen is aged 89 years in this portrait.

The reverse face of 2020 British Gold Britannia Coins includes a powerful depiction of Britannia, the female personification of England. Designed in 1987 by Philip Nathan, this powerful image of Britannia shows her standing on guard to defend the nation as she wields a trident in one hand and a shield with the Union Jack emblazoned on it in the other hand.

Please feel free to reach out to JM Bullion with your questions. Our team members are available at 800-276-6508, online using our live chat, and via our email address.