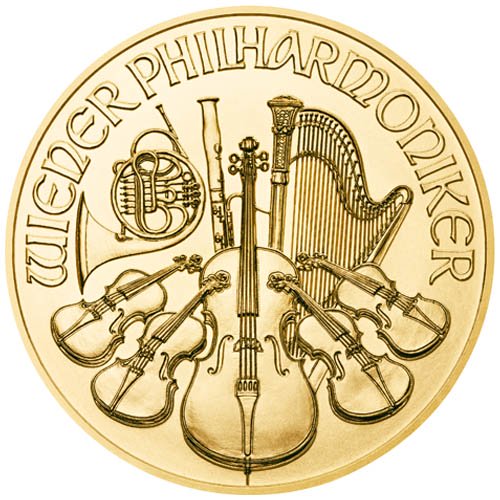 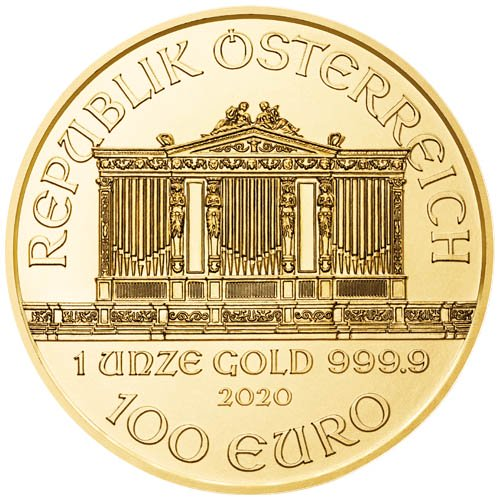 Each of the 2020 1 oz Austrian Gold Philharmonic coins in this listing comes to you in Brilliant Uncirculated condition. The coins are available to ship with an individual protective plastic flip or a tube containing 10 coins in total.

The 1 oz Gold Philharmonic was introduced by the Austrian Mint in 1989 along with a 1/4 oz version of the coin. These remained the only two options for the first two years. A 1/10 oz coin was later added in 1991 and a 1/2 oz coin in 1994. More recently, the series gained a 1/25 oz coin in 2014. This was initially as a special 25th-anniversaryrelease, but it proved so popular the mint has continued to issue it.

The obverse side of 2020 1 oz Austrian Gold Philharmonic Coins comes with the design of the Great Organ. This static musical instrument is located inside of the Musikverein, the home concert hall of the Vienna Philharmonic Orchestra.

On the reverse face of 2020 Austrian Gold Philharmonic Coins, you will find a series of musical instruments. Each one of these instruments is representative of the ones used by the members of the orchestra. Depicted in the design is a Vienna horn, bassoon, harp, and four violins with a cello in the center of the design field.

All 2020 Austrian Gold Philharmonic coins are produced by the Austrian Mint at its facility in the federal capital city of Vienna. The mint was founded by Duke Leopold V in 1194.

If you have any questions, please contact JM Bullion. Our customer service team is available at 800-276-6508, online through our live chat, and via our email address.