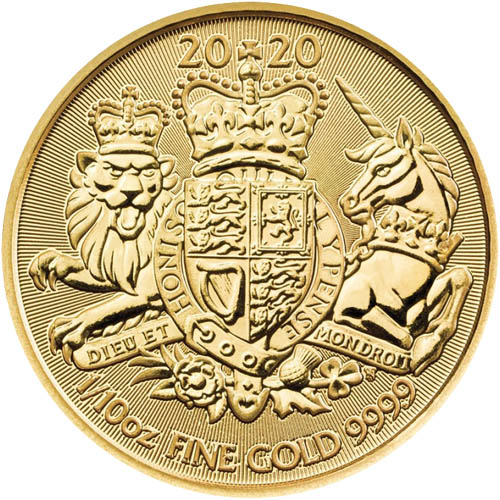 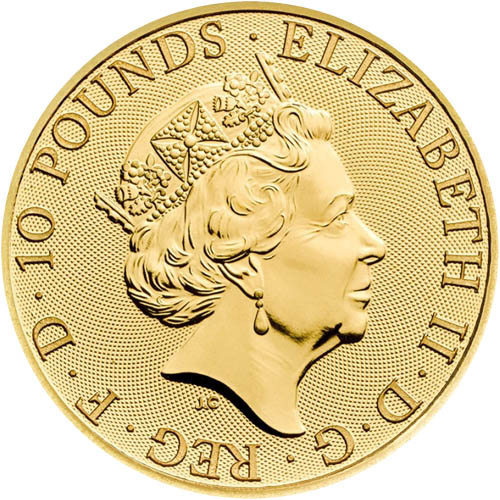 The gold coins for sale in the Royal Mint of Englands British Royal Arms Series is set to expand in 2020 with the release of these new 1/10 oz gold coins. Previously issued in 2019 with 1 oz gold and 1 oz silver options, the collection is expanding to new formats in 2020 with a 1 oz platinum coin and this first-ever fractional-ounce gold coin. Right now, 2020 1/10 oz British Gold Royal Arms Coins are available to purchase online from JM Bullion.

Each of the individual 2020 1/10 oz British Gold Royal Arms Coins in this product listing comes to you in Brilliant Uncirculated condition. The coins in this series are housed individually inside of protective plastic flips or inside of mint tubes of 10 coins.

Timothy Noad has created a modern artistic rendition of the Royal Arms of England for all of the coins in this series. His creation includes, at its heart, the quartered shield that forms the Royal Arms. In each of these quadrants is the symbol of a nation within the United Kingdom. It is important to note that this broader design represents the monarch of England, while the coat of arms featured in the quadrants represents the independent nations that monarch rules over.

The obverse face of 2020 1/10 oz British Gold Royal Arms Coins bears a depiction of Queen Elizabeth II. Here, you can see the Queen in right-profile relief in a fifth-generation design created by Jody Clark for the Royal Mint of England in 2015. In this design, the Queen is shown at the age of 89 and wears the George IV State Diadem crown on her head.

On the reverse side of 2020 British Gold Royal Arms Coins, you will find Mr. Noads design of the modern Royal Arms of England. The Lion of England supports the shield from the left, with the Unicorn of Scotland on the right. The Three Lions coat of arms for England is featured in two of the four quadrants on the shield. The rampant Lion of Scotland, adopted by the King of Scots in the 12th century, is found in one quadrant representing Scotland and the Harp of Ireland, representing Northern Ireland, is in the final quadrant.

If you have any questions, please contact JM Bullion. You can call our customer service team at 800-276-6508, chat with us live online, or email us directly.

Tamara from - March 23, 2020
"This is my final 1/10 coin purchased to make a nice bracelet of 1/10 gold coins. Now I am going back to buy my gold in one ounce coins or one ounce bars. Thank you JM Bullion for processing and shipping my order expediently - it is very much appreciated during these dismal times of self-isolation."