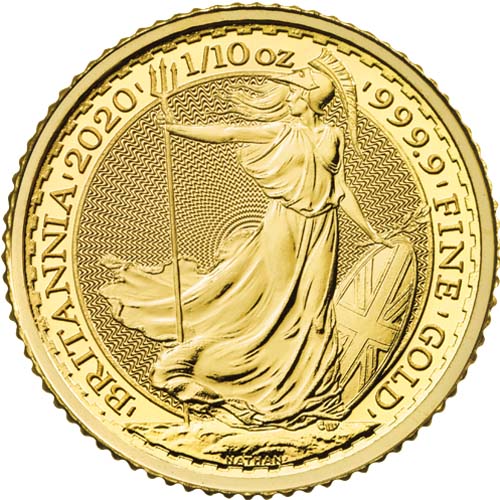 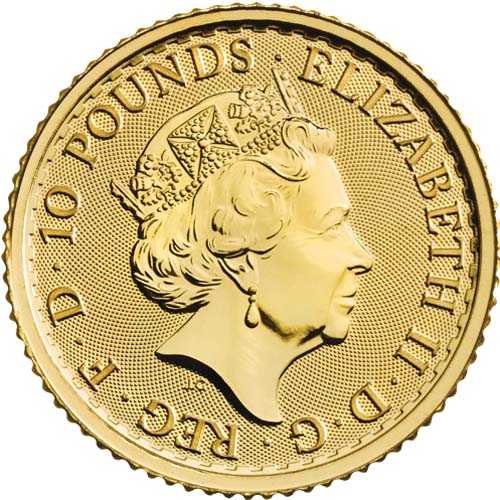 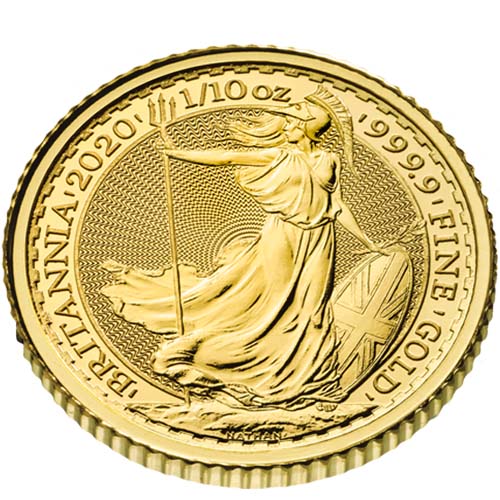 Britannia’s image on the reverse of the coins has remained steadfast since the 1987 debut of the coins. Philip Nathan’s design of Britannia won a Royal Mint-sponsored art contest to select a new Britannia image for the launch of the gold bullion series. Nathan created a strong, defiant image of Britannia for the series.

The obverse of 2020 1/10 oz British Gold Britannia Coins includes the latest fifth-generation effigy of Queen Elizabeth II. Designed in July 2015 by Jody Clark, the right-profile bust of the Queen includes the George IV State Diadem Crown on her head with inscriptions of her name and the face value included on this side. As of 2018, the background field on the obverse is dominated by a guilloche element.

On the reverse side of 2020 British Gold Britannia Coins is the female personification of Britain and the British people. Her figure stands resolute on the shores of Britain weathering the storm as she defends the Isles from outside threats. She holds a shield with her left hand that is emblazoned with the Union Jack and clutches a trident in her right hand. For protection, she wears a Corinthian battle helmet. The background field on this side of the coin has a radiating effect with a slice of the sun visible behind her figure at the center.

These 2020 1/10 oz British Gold Britannia Coins are available to you in Brilliant Uncirculated condition. The coins are packaged in individual flips or mint tubes of 25 coins.

JM Bullion customer service is available to you at 800-276-6508. Alternatively, you can reach out to us on the web using our live chat and email address features.